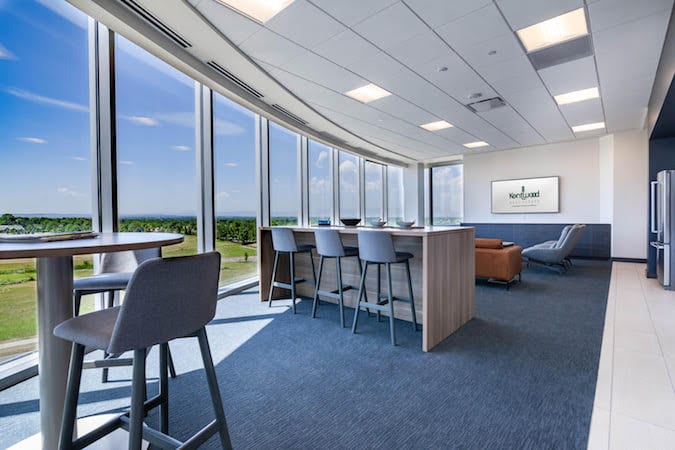 Shown is the Great Room area in the new Kentwood Real Estate office in One DTC West.

Kentwood Real Estate’s new DTC office is a mere nine-minute drive from the old space it was leasing in the Denver Tech Center.

But the new space, in a brand-new $25 million office building at 4949 S. Niagara St. in the One DTC West district west of the tech center, is an entirely new experience for the 120 agents and support staff who just moved into the 26,000-square-foot space.

“It is just completely different from our old space. It is so beautiful,” said Gretchen Rosenberg, CEO of Kentwood, which for several consecutive years has been one of the nation’s most productive residential real estate companies on a per-agent basis.

She quickly recited a number of reasons that set the space off from the previous space. 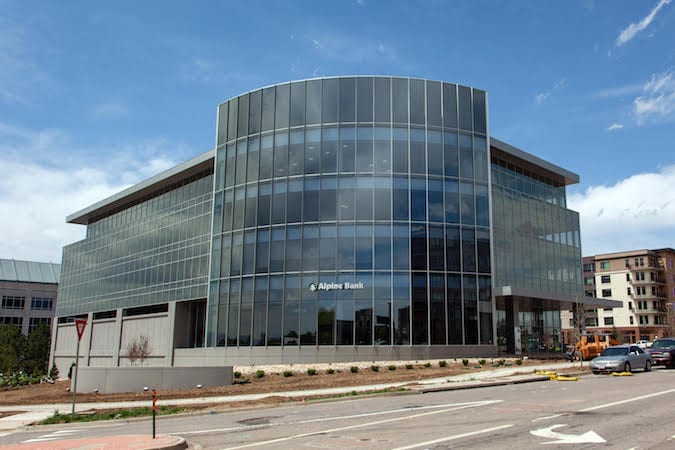 Kentwood Real Estate leases space on the fourth floor for brokers and on the second floor of this “gem of an office building” developed by Peter Niederman.

“It is light and it is airy. The glass curtain wall of windows gives it a very modern feeling. We have a Great Room that is sort of a party room where you can hang out and watch TV or talk.  It creates a real feeling of togetherness.”

One agent recently told her that in the week since they have been in the new digs, he has visited the office more than he had the previous space in the past six months.

The 75,000-sf office building, at the northwest corner of East Belleview Avenue and South Niagra Street, was developed by Peter Niederman and Frank Hutto.

Niederman is the chairman of Kentwood and Hutto is a Denver energy executive. In 2016, Niederman sold Kentwood to HomeServices of America, an affiliate of Berkshire Hathaway Inc., the $470 billion market-cap fund founded and managed by legendary investor Warren Buffett. 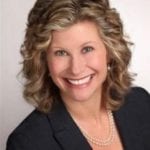 The LEED Gold-certified building, where other tenants include Land Title Guarantee Co. and Alpine Bank, was designed by Barber Architecture, headed by Michael Barber.

Although the new building is a great place to brainstorm, Rosenberg, Niederman and the 90 agents working in the space didn’t need to brainstorm on the features needed on the fourth and top floor in the new space.

“We didn’t create a design committee or anything because two years ago we had gone through this with our new space in Cherry Creek, so we had a really good sense of what we wanted,” Rosenberg explained.

Rosenberg said her favorite part of the brokerage space on the fourth floor of the four-story building is the Great Room.

“Yesterday, we sat around and watched the hailstorm moving in,” Rosenberg said Wednesday afternoon. “You have this large glass window that just provides a magnificent view of the mountains. Sitting on one of the high-top barstools, it is just a great place to look at the foothills.” 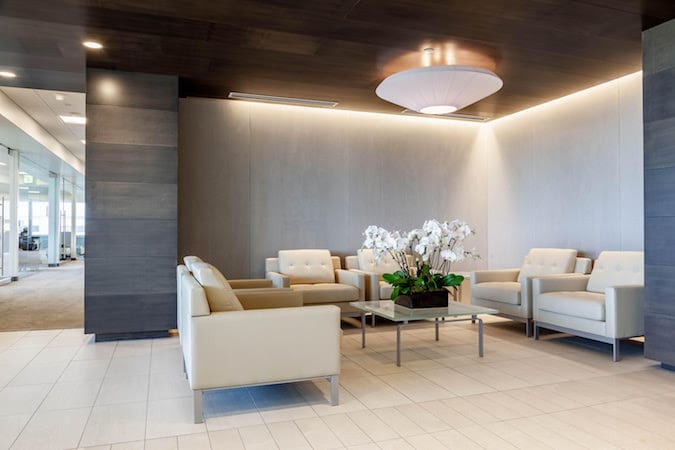 Not only is the building great, but so is the location, according to Staerkel.

“This new space allows for walkability to the new and exciting Belleview Station area, offering our Realtors easy access to restaurants, coffee, and shops for business meetings,” she said.

The new Kentwood office not only is top-of-the-line space for the brokers who sell a wide range of homes in the area, including some of the most expensive in the metro area, but also will serve as a good recruitment tool.

“That certainly is our hope down the road,” Rosenberg said.