NAI Affinity in Fort Collins is listing 863 acres that has been annexed by Greeley.

Chrisland, founded in 2003, changed its name to Affinity Real Estate Partners Inc. The firm does business as NAI Affinity.

“NAI globally is one of the top five commercial real estate brands in the world,” noted Ryan Schaefer. Schaefer was the co-founder of Chrisland and will remain CEO of NAI Affinity.

Perhaps even more important than the NAI cachet is “you can affiliate with it and maintain local ownership,” Schaefer explained.

Most global real estate firms require you to give up local ownership, he noted.

Also, NAI isn’t limited to brokerage firms. It also allows companies to develop and invest in real estate. NAI Affinity’s business is about half brokerage and half investments, Schaefer said.

Schaefer received his brokerage license when he was 19 and studying finance at Colorado State University.

“I started out selling land, primarily,” Schaefer said. “We tend to do a lot of land up here.” 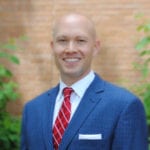 Indeed, Schaefer and NAI Affinity president Jake Hallauer are listing what is known as the 2534 master-planned community, an 863-acre swath of land annexed by Johnstown.

“We had owned 70 acres of a 540-acre master-planned community in the land, but we sold our piece to Spanos for apartments and to others,” Schaefer said.

The large tracts of vacant land available in Northern Colorado could be astounding to global investors not used seeing so much acreage available, he said.

In fact, about three weeks ago he attended a NAI corporate meeting in St. Louis and spoke to an investor in Germany looking for opportunities across the U.S.

“I do think our affiliation could put Northern Colorado on the global map” for investment opportunities, he said.

“It also will be a two-way street,” Schaefer said.

“We will be able to expose our clients to investment opportunities we would not have been aware of before we joined NAI.

When Chrisland joined NAI earlier this year, Jay Olshonsky, president and CEO of NAI Global, had this to say: “Adding the Fort Collins MSA to the NAI map has allowed us to combine in-market strengths and form a powerful bond of insight and execution to address clients’ local and multimarket challenges globally.”

Schaefer did not speak to anyone at Denver-based NAI Shames Makovsky before joining the network.

However, Schaeffer did connect with Evan Kline, a managing broker at NAI Shames Makovsky, at the recent conference in St. Louis.

“Evan was fantastic,” Schaeffer said. “He could not have been more gracious. I look forward to working with him. I also think we will have synergies with the Colorado Springs NAI office, called NAI Highland.”

The Western Slope is covered by NAI Mountain Commercial in Avon.