Development is poised to take place east of Interstate 25 in RidgeGate.

RidgeGate, the 15-year-old mixed-use community along Interstate 25 in Lone Tree, on Monday unveiled a plan for its City Center that eventually will have enough development to support another 50,000 jobs.

Future development east of I-25 also could bring another 10,000 residential units to RidgeGate.

Housing, from apartments to single-family detached homes, could add 40,000 residents to RidgeGate, more than doubling the population of Lone Tree.

Last month, with little fanfare, the Lone Tree City Council unanimously approved planning documents that will guide the development of more than 2,200 acres over the next several decades in the mixed-use, master planned RidgeGate community on the east side of I-25. 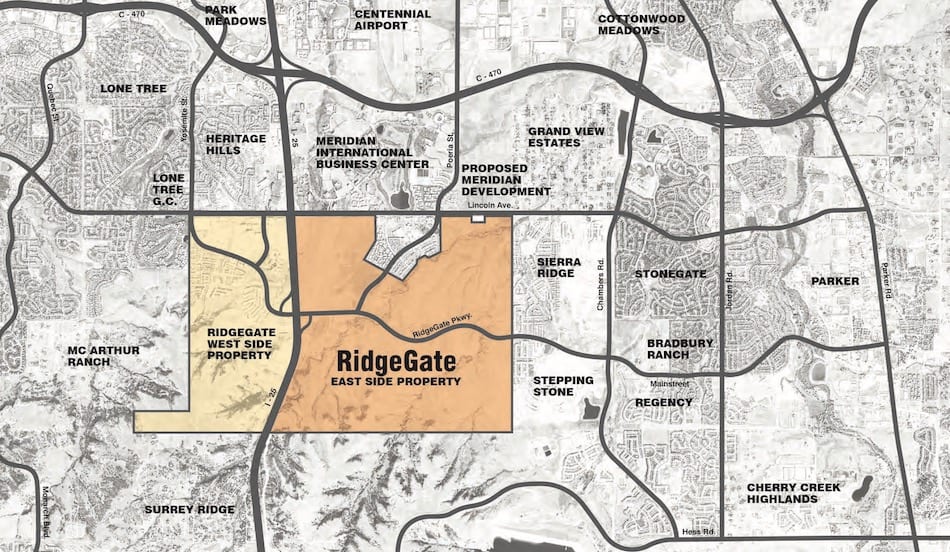 The east side of RidgeGate could include as much as 10 million square feet of commercial space, enough to support 50,000 new jobs.

Plans were approved for the 400-acre Lone Tree City Center and the 1,800-acre East Villages.

“We spent 15 years working on the west side of RidgeGate and now it is almost built out, so it is time to turn our attention to the east side of I-25,” said Keith Simon, executive vice president and director of development for Coventry Development Corp., the master developer for RidgeGate.

RidgeGate traces its roots to 1972, when Douglas County zoned the land. The city of Lone Tree annexed the property in 2000 in a citywide election.

The City Center not only will serve as the downtown for RidgeGate but also will be the de facto downtown for Lone Tree and surrounding communities, according to Simon.

“RidgeGate is the southern gateway to the entire metro area,” Simon said. “So really this will serve as the downtown for the entire region, including Lone Tree, Centennial and southern Douglas County.”

He anticipates that 8 million to 10 million square feet of commercial space will be developed east of I-25 in RidgeGate.

“That would include offices, retail, hotels and so forth,” Simon said.

The 650,000-square-foot, LEED Platinum Charles Schwab campus is an anchor business on the west side of I-25 in RidgeGate.

Currently, about 7,000 people work on the west side of RidgeGate, many of them in the 650,000-sf Charles Schwab office campus and Sky Ridge Medical Center.

The tallest future buildings along the east side of RidgeGate likely will have 10 stories, although a couple may have 12 stories, he said.

“We want to be sensitive to the Centennial Airport and make sure the height of the buildings does not impact planes from the airport,” Simon said.

In any case, the maximum height of the buildings is ideal, he indicated.

“A year from now, we will have three light-rail stations,” Simon said. “All of them are under construction.”

Many people who work in RidgeGate also live there, he said. 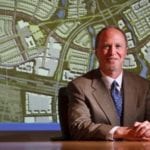 “Companies love that people can walk to work, if they wish,” Simon said.

Rather than a TOD, however, he said, RidgeGate might be better described as a DOT, or development-oriented transportation community.

That is because in many instances, a TOD tries to “squeeze” transportation such as light rail through existing developed area.

In this case, the light rail will be in place to support future development, he noted.

“A lot of great, walkable cities in the world are kind of 10-story cities,” Simon said. “In Washington, D.C., most of the buildings don’t top 10 stories. And Paris is kind of a 10-story city.”

With 10 stories, it is clear an area has an urban feel, but is not as overwhelming and out of place as if skyscrapers were allowed, he said.

Development will include a grid of streets and two light-rail stations on the RTD Southeast line, already under construction. The East Villages will be a series of three distinct residential neighborhoods with integrated commercial uses and an extensive park and open space network.

Today it includes the Charles Schwab Campus, with its 4,500 employees, and more than 2,200 residential units that are home to over 6,000 residents.

RidgeGate’s West Village also includes two retail centers with more than 500,000 square feet of space, as well as amenities like the Lone Tree Recreation Center, a Douglas County Library branch, and the Lone Tree Arts Center. Only a handful of available development sites remain in the West Village.

“Lone Tree and RidgeGate have demonstrated what can be accomplished when a municipality and a community developer collaborate to achieve their goals,” said Lone Tree Mayor Jackie Millet. 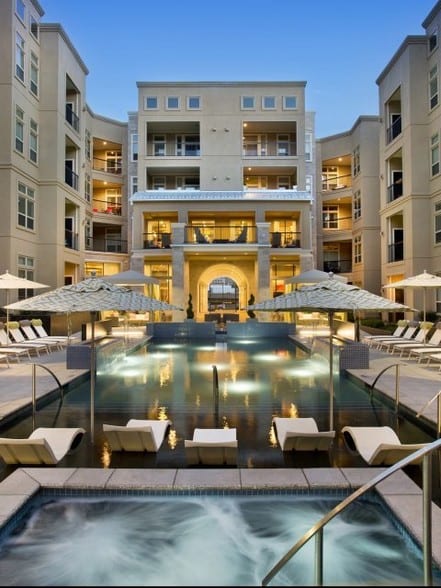 Amli at RidgeGate is the type of luxury rental community found on the west side of Interstate 25 in the master-planned, mixed-use community.

“In just 15 years, the RidgeGate West Village has enhanced the quality and character of our community with expanded employment, retail, recreational and cultural amenities,” Millet continued.

RidgeGate has also committed to the inclusion of 350 units of attainable housing in RidgeGate East, and the donation of over 145 acres of land for new civic facilities and public schools.

“We haven’t decided yet whether we will require the new buildings to be LEED certified, although we are certainly big supporters of sustainability and energy-efficient development,” Simon said. 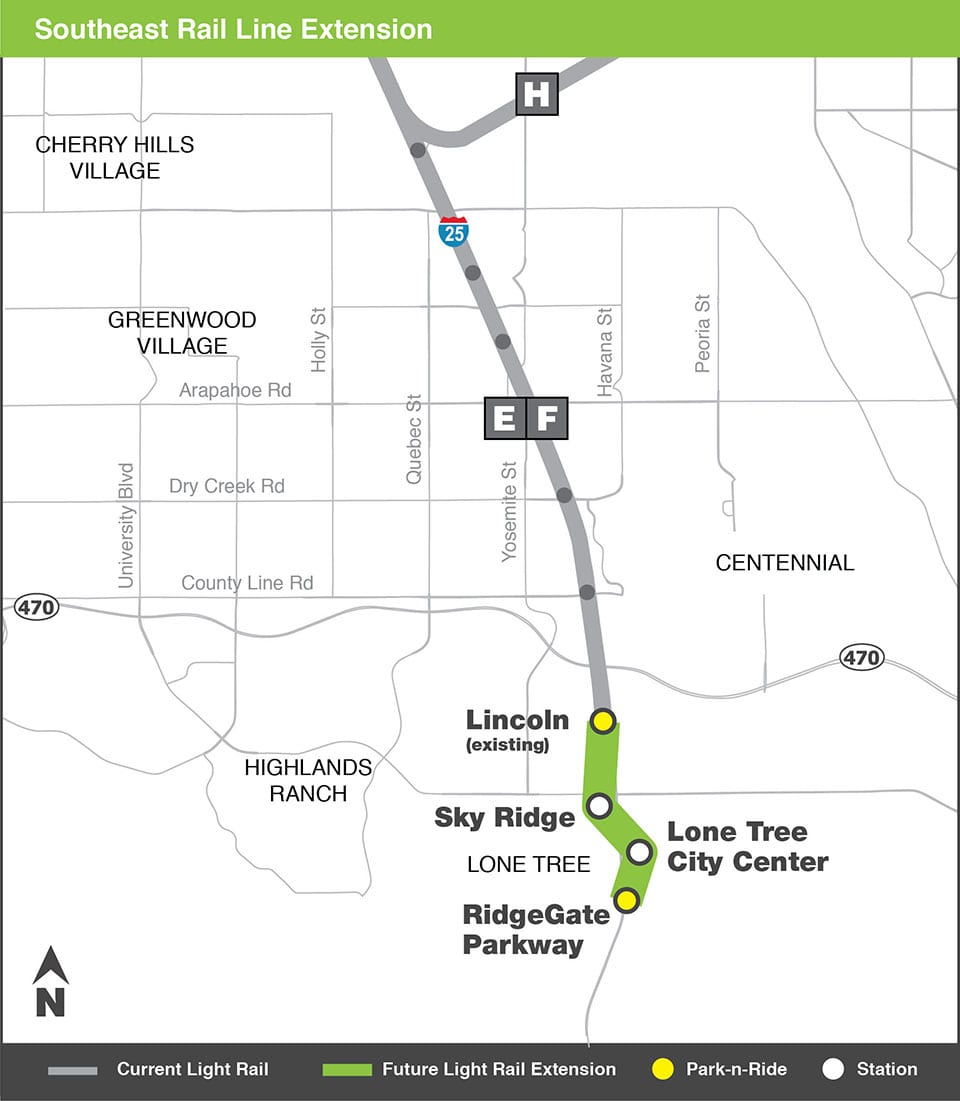 Light-rail stations are coming to RidgeGate.

“We are looking for placemaking and thoughtful urban design to be a hallmark of the continued development on the east side of I-25,” Simon said.

“This means creating diversity and walkability with mixed-use districts, and vibrancy with parks and plazas for outdoor movies, farmers markets and other community events,” Simon continued.

“We will include a variety of public spaces and places to enhance health, well-being, education and safety. In fact, parks and open space will make up a quarter of our total acreage in RidgeGate East.”