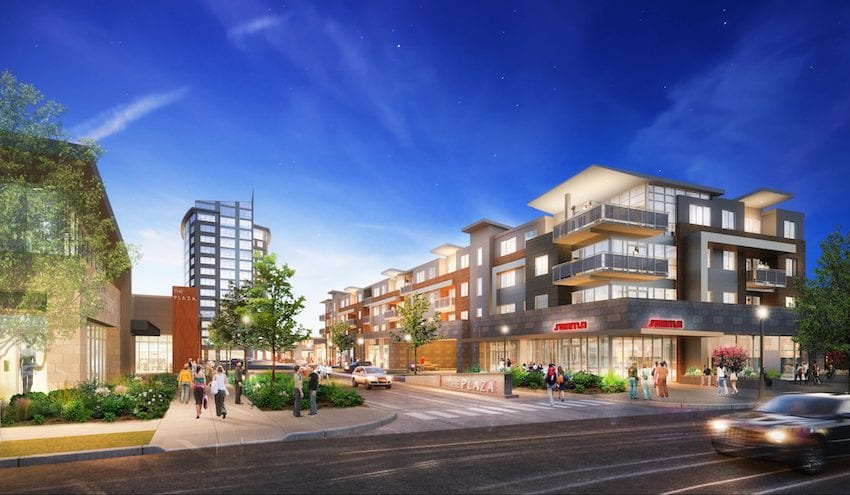 A rendering of the redevelopment of Regatta Plaza. It will be redeveloped by George Thorn and Buz and Carl Koelbel.

Two veteran development teams, George Thorn of Mile High Development and Koelbel & Co. have teamed up to develop a key 21.5-acre, transit-oriented development in Aurora at what is considered the southern entrance to the city.

“It is a long time coming,” said Thorn about what is known as Regatta Plaza at Interstate 225 and Parker Road.

The redevelopment will likely include a 12-story office building.

“It will be the first Class A office high-rise built in Aurora for I don’t know how many years,” Thorn said.

“They’re going up everywhere around them, so it is about time that Aurora had one. And you won’t find a better site.”

The development is served by the Nine Mile light-rail station, making it a true TOD, Thorn said.

For a template on what the redevelopment would be, you could look at the Colorado Center, which Thorn developed at Interstate 25 and Colorado Boulevard in 1986.

Colorado Center includes two 12-story office buildings, as well as 132,000 square feet of retail, including a United Artist Theatre with an IMAX screen.

Colorado Center, like Regatta Plaza, is on a light-rail station.

“When it is all said and done, we probably will end up in the neighborhood of 700,000 square feet in Regatta Plaza,” Thorn said.

In addition, Regatta will have about 400 units of housing.

The concept provides flexibility for additional office or a hotel if market conditions are favorable.

Thorn and Koelbel, who were picked as the master developers by the Aurora Urban Renewal Authority, at the end of May started to raze the dilapidated buildings on the mostly abandoned sites.

It is one of the most blighted sites in Aurora, Thorn said.

“Most of the buildings have been vacant for years,” making them a magnet for drug dealers and vagrants he said.

“All kinds of bad things have been happening there,” he said.

City officials are thrilled to see the site redeveloped.

There is about a 50,000-sf King Soopers on the site, which is small by today’s standards.

There also is a Key Bank on the site. The bank will be incorporated into the redevelopment. A Firestone center also has a business on the site.

Thorn, Buz Koelbel and his son, Carl, have developed, or will develop, four affordable housing communities together, including one on the former University of Colorado medical center at Ninth Avenue and Colorado Boulevard in Denver, but this is their first joint venture for a mixed-use development.

“I did develop an office building with Walt Koelbel (the father of Buz) in the Denver Tech Center in 1981, but this is our first project together that is not affordable housing in this cycle,” Thorn said.

The development concept plan will serve as the basis for future discussions on a final development plan among the Aurora Urban Renewal Authority, the property owners and the preferred master developer.

AURA does not own the property.

It will be a number of months before progress on the actual site will be visible.

The Aurora Urban Renewal Authority must spend the next 45 days or so formalizing the agreement with Mile High/Koelbel. At that point, the developer will begin conversations with Regatta Plaza’s four property owners to determine the final ownership structure of the site.

This summer, Thorn’s and Koelbel’s vision will be presented as part of a community outreach effort before the planning and zoning process is underway.

The public will have an opportunity to share feedback on the project vision.

“All of us on the Mile High/Koelbel team are excited about working on the Regatta Plaza opportunity with the Aurora Urban Renewal Authority and the city of Aurora, and we are honored to have been selected as the preferred master developer,” Thorn said. “We believe that this site represents one of the best transit-oriented development sites in the entire FasTracks system, and look forward to working with AURA, the city and the community to share our vision for a truly dynamic mixed-use project.”

The Regatta Plaza site is at the northeast corner of Parker Road and Peoria Street.

A request for qualifications was issued last August, and the three most qualified applicants were invited to participate in the request for proposals process. “Aurora is a changing city, and the redevelopment of Regatta Plaza is a critical next step in that ongoing transformation,” said Aurora Mayor Steve Hogan.

“This is the southern entrance to our city and a highly visible stop along the Aurora Line/I-225 Rail.

“The redevelopment that is to come will provide new and vibrant housing and live-work choices in a unique urban environment connected to everything.”