Englewood poised to take off

The Engelwood CityCenter, the first TOD in the metro area, provides a rare redevelopment opportunity.

Englewood has been flying below the radar for a long time.

Now, Englewood’s commercial core is poised to be begin the process of being re-invented as a revitalized and walkable transit-oriented, mixed-use development site.

Indeed, Englewood’s 55-acre CityCenter already is a pioneering transit-oriented developmet (TOD) in the Denver area. Development within a half-mile of a light rail station often is considered a TOD.

“As a longtime Denverite, I have a lot of fond impressions of Englewood, dating back to the old Cinderella City mall,” Poremba told me Wednesday.

Englewood’s CityCenter, the first TOD in the metro area, could be redeveloped to include everything from a corporate headquarters to hotels.

CityCenter was the first TOD site in the Denver area. CityCenter replaced Cinderella City, once the largest covered mall west of the Mississippi River. Cinderella was razed in 1999 to pave the way for the mixed-use CityCenter, which includes apartments, offices, retail and Englewood’s Civic Center government building.

“Like many built-out, first-tier cities, Englewood has flown below the radar,” Poremba said.

Yet, Englewood holds a unique position as a redevelopment opportunity, he said.

“If you really look at it, Englewood’s proximity to Denver and the tech center, and its access both by rail and roadways, is fantastic. Englewood couldn’t have a better location,” Poremba said. “Englewood is the closest small town to Denver, with a healthy quality of life, strong business environment and relatively affordable neighborhoods.”

In his new role, Poremba is focused on redevelopment opportunities along the South Broadway corridor, including Englewood’s historic downtown, a growing Healthcare District anchored by Swedish and Craig hospitals and the 20-year-old TOD CityCenter area.

“Swedish and Craig have continued to grow in size and really have  national and international reputations for their level of care and expertise. Yet, they’ve probably been overshadowed a bit by some of the newer medical centers in the Denver area,” Poremba said.

The South Broadway corridor in Englewood is one of only eight in the United States being studied by the Urban Land Institute as part of its Healthy Corridors Initiative.

This national study explores strategies for transforming commercial corridors into places that support the health of the people who live, work and travel in them.

Over the past year, ULI and its Colorado District Council led a group of national experts and local stakeholders for a multiphase study of the corridor. Englewood will implement many of their key recommendations, which call for reclaiming South Broadway as the community’s “main street,” in part by improving its connectivity to CityCenter and the Healthcare District. 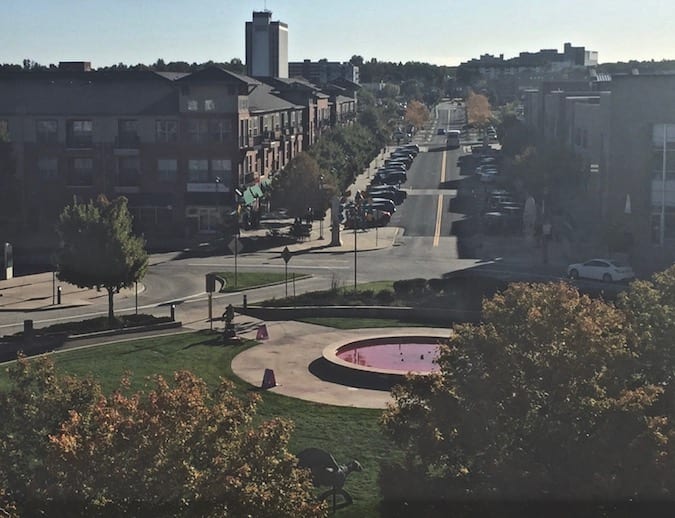 The challenge for Englewood is to redevelop CityCenter while retaining its small-town charm.

ULI noted that investors are increasingly attracted to Englewood redevelopment potential due to its regional accessibility, growing medical center, and an influx of millennials and baby boomers.

It’s too early to even estimate the cost or size of a redevelopment of a portion of CityCenter, Poremba said.

“But it will be significant,” both in the size and the scope, he said.

“We have so much surface parking here, which was true of the big box retail era across the country,” Poremba said. “We could have a lot development on top of the surface parking lot and incorporate some structured parking.”

His “wish list” for future developments at CityCenter include “one or two hotels. There is a notable lack of hotels in the market. They could be a significant asset for serving the hospitals.”

He also said CityCenter “has a good chance to capture a major corporate office,” that would benefit from the site’s proximity to light rail, he said.

The CityCenter area did lose a huge corporate headquarters when Sports Authority declared bankruptcy in 2016. At its peak, the sporting goods giant employed 800.

Just south of CityCenter, one of the former Sports Authority buildings has been extensively redeveloped and heightened and will open later this month as Earth Treks Climbing and Fitness.

At 53,000 square feet, it will be one of the largest and most advanced climbing gyms in the U.S.

“We lost some daytime employees with the loss of Sports Authority, but Earth Treks makes Englewood a major player in the outdoor recreation industry in Colorado,” Poremba said.

Adjacent to Earth Treks, a new apartment project is being planned to take advantage of the western views and the proximity to CityCenter and the FasTracks Englewood Station.

“The increase in new residents and sports enthusiasts is bringing new vitality and redevelopment opportunities to the heart of Englewood,” according to Poremba. 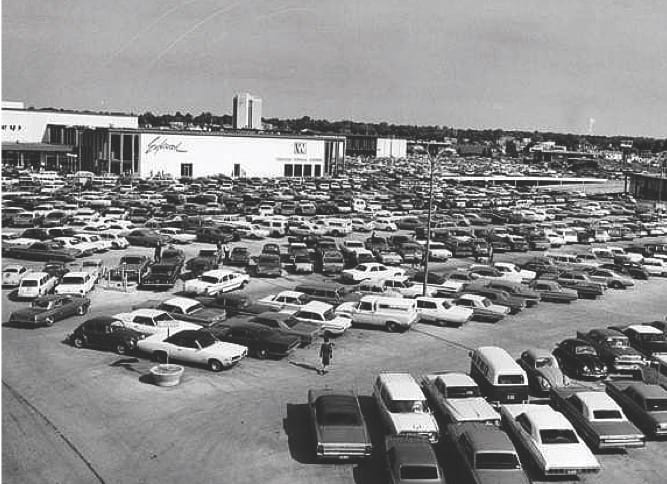 CityCenter replaced Cinderalla City, which once was the largest covered mall west of the Mississippi River.

He added that a number of new restaurants and bars are planting their flags on the nearby downtown portion of South Broadway.

However, the CityCenter site is not in the running for Amazon’s second headquarters.

“My sense is Amazon is looking for something that is further along in the comprehensive planning stage, while we really are at the start of the process,” he said.

One thing that does give Englewood’s core area an advantage in attracting businesses is that, in April, it was designated an Opportunity Zone by the U.S. Department of Treasury. This new designation, part of the 2017 Tax Cuts and Jobs Act, offers generous tax savings for capital gains transactions and new real estate and business investments. The entire area is also included in the Colorado Enterprise Zone, which offers state tax credits for certain investments to incentivize business relocation and new development.

Poremba also said he expects more apartments, townhomes and condos to be built on the site.

“Housing is definitely a good fit,” he said.

The redeveloped CityCenter will be walkable, he said.

“It has to be,” Poremba said, noting that the city will continue to build on the fact that CityCenter’s Englewood Station is served by two RTD FasTracks lines, multiple bus lines, the Englewood Trolley and other transit options. 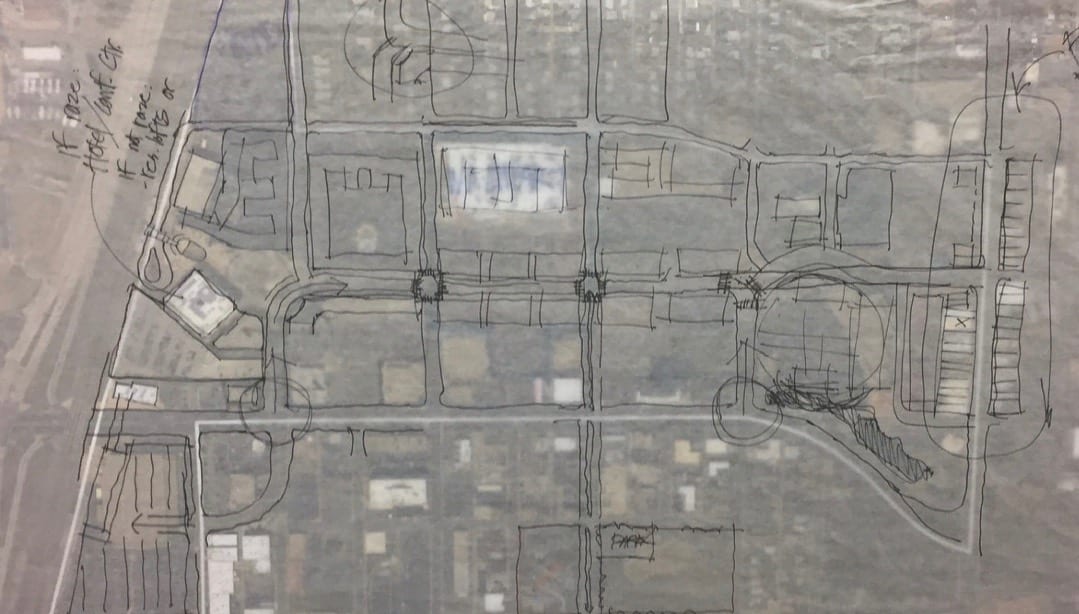 This sketch from the ULI task force illustrates how Englewood Parkway could be transformed into a walkable Main Street connecting the “barbells” of South Broadway and the CityCenter area in Englewood.

A portion of CityCenter owned by Weingarten Realty is being foreclosed on. An Arapahoe County Public Trustee’s sale, currently is scheduled for July 25.

The three-square-block parcel, south of Englewood Parkway and fronting Hampden Avenue just east of the Englewood Civic Center Building, was originally developed by Miller Weingarten, the predecessor to Weingarten Realty.

The foreclosure covers approximately 219,000 square feet of space, including big box retail, smaller stores, restaurants and some offices. CityCenter properties not part of the foreclosure include the 438-unit ArtWalk at CityCenter Apartments, a high-volume Walmart store and the Englewood Civic Center building, which houses the city offices, courts, public library and the Museum of Outdoor Arts.

The foreclosure provides a timely opportunity to plan for and pursue an updated mix of uses, such as office, hotel, residential, smaller-format retail, education and entertainment, said Poremba.

The city ground-leased the property to Weingarten and anticipates collaborating on a variety of public-private partnership redevelopment ideas with C-III Asset Management, the special servicer expected to obtain title to and then market the property for sale. Subject to City Council approval, a redevelopment plan and ground-lease modification will likely be finalized via collaborations with the ultimate buyer.

“CityCenter presents a unique opportunity nationally to orchestrate the second-generation redevelopment for a major TOD project and to catalyze investment in adjacent areas, including South Broadway and the Healthcare District,” said Brad Power, director of community development. “The transit access to the entire metro area and recent Opportunity Zone designation give Englewood a real competitive advantage in attracting new employers, residents and real estate capital.”