A rendering of the civic center building under construction in Sterling Ranch in Northwest Douglas County.

While much has been written about affordable housing and the acute labor shortage, as pressing as these problems are, they take a backseat to water.

Without water, development and growth in a semi-arid region like the Front Range, grinds to a halt.

But water, like the ever-changing weather in Colorado, seems to be something everyone talks about but never does anything about it. 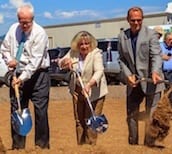 With the notable exception of Sterling Ranch.

That is why I was thrilled to drive to the 3,400-acre Sterling Ranch in Northwest Douglas County last Friday for a groundbreaking of the first commercial building in the $4.4 billion master-planned, mixed-use community, which eventually will include 2 million square feet of commercial space and 12,000 homes.

Twenty minutes from downtown Denver, I arrived at Sterling Ranch, west of Santa Fe Drive and just south of West Titan Road, to attend the kickoff ceremony for the civic center building in Sterling Ranch.

Beyond the building itself, Sterling Ranch is a sustainable, walkable, high-tech  community that is “one with the land and the land is one with it,” as Harold Smethills put it at the ceremony, which preceded the actual start of the center’s construction on Monday.

While this is the first commercial building, all of the future retail and office space will evolve to meet the needs of residents at Sterling Ranch. That said, a high-profile and highly acclaimed retail development is expected to announce its plans for Sterling Ranch in the near future. That’s all I am allowed to tell you at this point, as it’s all very hush-hush until it goes public with its plans.

But, despite its size, what really puts Sterling Ranch on the map is its commitment to being a good steward when it comes to saving water, our most precious resource.

With regard to water conservation, it has been said that, “As Sterling Ranch goes, so goes the West.”

That is not hyperbole.

Not only is Sterling Ranch, which just now is welcoming its first residents, the most advanced water conservation community in Colorado, but it also has been showcased as a model for communities all across the nation. In 2009, the Wall Street Journal, for example, put a national spotlight on Sterling Ranch under the headline: “In Arid West, Thirsty Lawns Get Cut From Plans.” 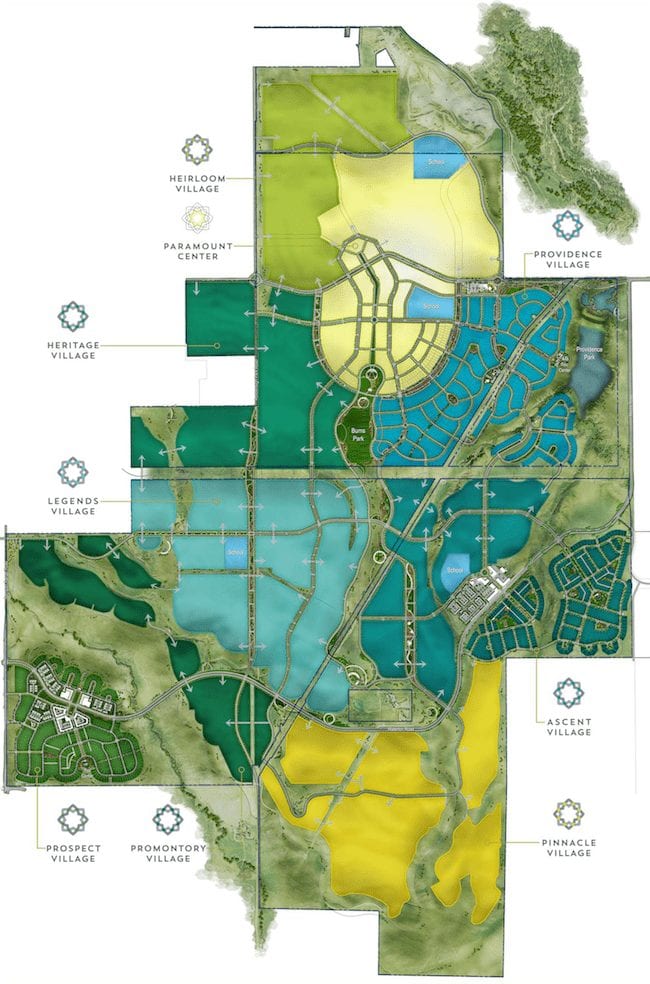 Shown is a master plan map of Sterling Ranch, where being a good steward of water is all important. The new civic center building is under construction in Providence Village.

Smethills and his wife, Diane, as heads of the Sterling Ranch Development Co., began working on Sterling Ranch in 2003. Their son, Brock, who holds an engineering degree from Vanderbilt University and worked on the design and materials for the Sample Return Capsule for NASA’s OSIRI-Rex satellite at the nearby Lockheed Martin campus, is the chief technology officer for Sterling Ranch.

“It seems like yesterday,” Harold Smethills recalled about the early days of Sterling Ranch. “It has been quite a journey.”

With the civic center scheduled to open in spring 2018 and the first homes being built in its inaugural community, Providence Village, Sterling Ranch is at last taking shape.

The Smethills’ commitment to water conservation has been a constant since day one at Sterling Ranch.

Sterling Ranch is Colorado’s first rainwater harvesting community. Eventually 40 percent of the water at Sterling Ranch will come from renewable rainwater and snowmelt. Sterling Ranch has worked closely with the Denver Botanic Gardens on the best plants to use to save water.

Through technology and best water conservation practices, Sterling Ranch also has come up with “a new solution to an old problem,” Harold Smethills noted.

Typically, as consumers conserve water, the price of water rises. That is because using less water doesn’t lessen the fixed costs of maintaining, repairing and improving the water infrastructure that brings water into our homes and businesses.

But in Sterling Ranch, while far less water will be used, the cost of the water will remain constant or drop.

And it’s not just water savings that have led to 40 to 50 homes priced from the $400,000s to more than $600,000 already being sold and dozens more being placed under contract in the community, which eventually will feature multiple schools.

Sterling Ranch voluntarily committed $2,900 of each home sale to a Northwest Douglas County fund addressing transportation needs for the area. 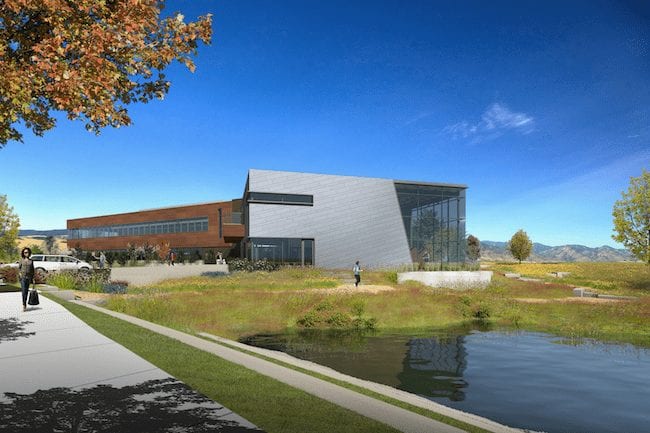 Another view of the civic center building being built by Mortenson in Sterling Ranch. It is being designed by Eppstein Uhen Architects, which recently established a new office in Denver by acquiring Burkettdesign, now BurkettEUA.

For example, each home will be served by CenturyLink and will receive two lines of fiber-optic cable. Technology developed by IBM and Siemens will provide 1-gigabyte speed. How fast is that? You can download an HD movie in less than three seconds.

Sterling Ranch also connects to a trail system allowing residents and business tenants to enjoy the abundant wildlife in the area, including elk, deer, antelope and eagles.

(Harold Smethills deadpanned that you would run out of trail after 526 miles from Sterling Ranch as its trail connections end in Durango.)

And then there is the new civic center, which will serve as an anchor for Providence, where homes are under construction. Builders in Providence include:

The civic center building also has landed an anchor tenant.

UCHealth is taking 8,000 sf in the building. It will be the first health system to offer outpatient health care services to residents in the area. Its exact services will be in response to what people in the area want. It could include physical therapy and pediatrics, for example. The new center will not be a full-fledged hospital, of course. However, it will be a mere 10-minute drive from the $315 million, 77-bed UCHealth hospital under construction near Lucent Boulevard and C-470 in Highlands Ranch.

The civic center building is being constructed by Mortenson and designed by Eppstein Uhen Architects.

EUA, based in Milwaukee, recently acquired Burkettdesign, now BurkettEUA, providing it with a 28-person staff at 1899 Wynkoop St. in LoDo.

“Mortenson Development is excited to help this incredible community enter the next phase of its development,” said Taber Sweet, development executive for Mortenson.

“This first commercial building at Sterling Ranch is a milestone,” he added, especially considering the contribution UCHealth will provide to the wellness of nearby residents.

“Working on this project has been truly rewarding,” said architect Greg Uhen, CEO of EUA.

“The Sterling Ranch property is a one-of-a-kind opportunity to create a place like no other in the Denver area,” according to Uhen. 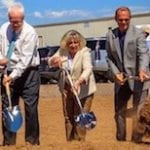 From left, at the groundbreaking, Harold Smethills, Diane Smethills and Greg Uhen

The civic center will feature business space, a community room and exhibit hall. A second-floor deck overlooks the neighborhood and provides postcard perfect views of the mountains.

The energy-efficient windows have been positioned for views and to bring in a lot of natural light, and in a way to maximize sunlight for passive solar benefits.

The bold stainless steel skin on the civic hall, contrasting with natural materials on the other wing of the building, will provide an “iconic presence for Sterling Ranch,” according to Mortenson.

The building also will be surrounded by walking paths and gardens that can be used to educate schoolchildren and adults on how to grow beautiful plants and flowers using a minimum amount of water.

And it almost goes without saying that the civic center building will showcase the cutting edge in water conservation technology that permeates through Sterling Ranch.

Uhen recalled being introduced to Harold Smethills through a mutual friend and looking at the site for the first time.

The civic center building itself is a good metaphor for Sterling Ranch, as it will span the intersection of “nature and technology, and really that is the theme of Sterling Ranch,” Uhen said.