Solana in Highlands Ranch checks all the boxes 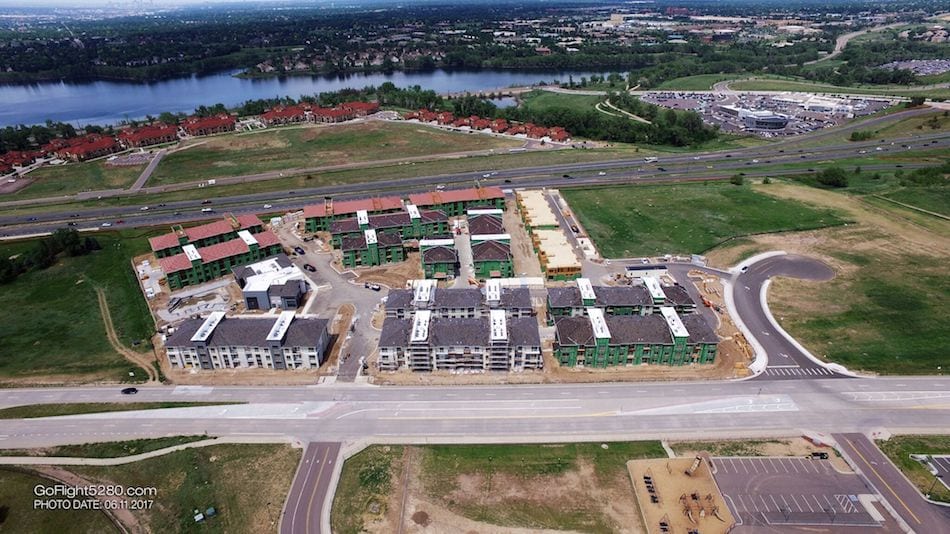 If you had a blank suburban canvas and had a checklist for a first-class apartment community, it would be hard to beat the 9.89-acre site that is home to Solana Lucent Station. 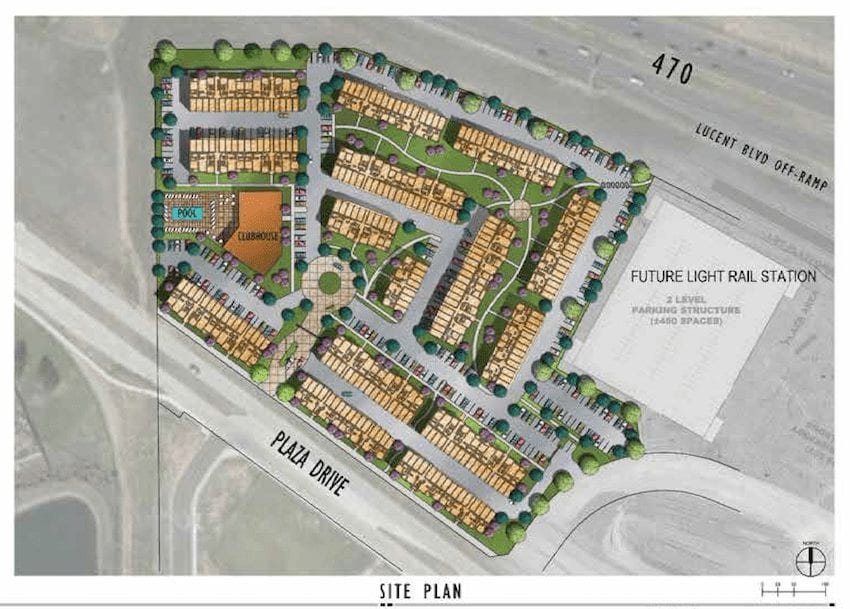 Site plan for the Solana Lucent Station. Notice how close the future light-rail station is to the community.

High-demographic area? Check that box. The median household income within a 3-mile radius of the community at 1935 Plaza Drive is $109,187, according to CoStar.

Near the entrance of one of the nation’s largest master-planned communities? Check. It’s near C-470 and Lucent Boulevard, arguably the northern gateway to Highlands Ranch.

Employment and other opportunities? Check. Down Lucent Boulevard is a large office park. It also is minutes from the new Children’s Hospital South Campus and a large medical office building, Panorama Orthopedics.

Access? Check. You are minutes from Santa Fe Drive, which during non-rush hour, is an easy commute to downtown Denver. You could also take C-470 to E-470 and get to Denver International Airport painlessly.

Transit-oriented deevelopment? Check. Or at least it’s coming. Residents will be able to step over the property and be on the coming Lucent light-rail station, the end of the Southwest line, which currently ends 1.2 miles away at the Mineral Station in Aspen Grove.

The 285-unit, 15-building Solana Lucent Station is the fourth community in the Boulder-Denver area developed by ReyLenn Properties. ReyLenn, based in the San Diego area, has developed more than 10,000 apartment units in the U.S. during the past 12 years, with a total value topping $1.7 billion.

ReyLenn clearly is bullish on Denver, as when Solana Lucent Station is completely opened, ReyLenn will have developed 1,297 units in the metro area. 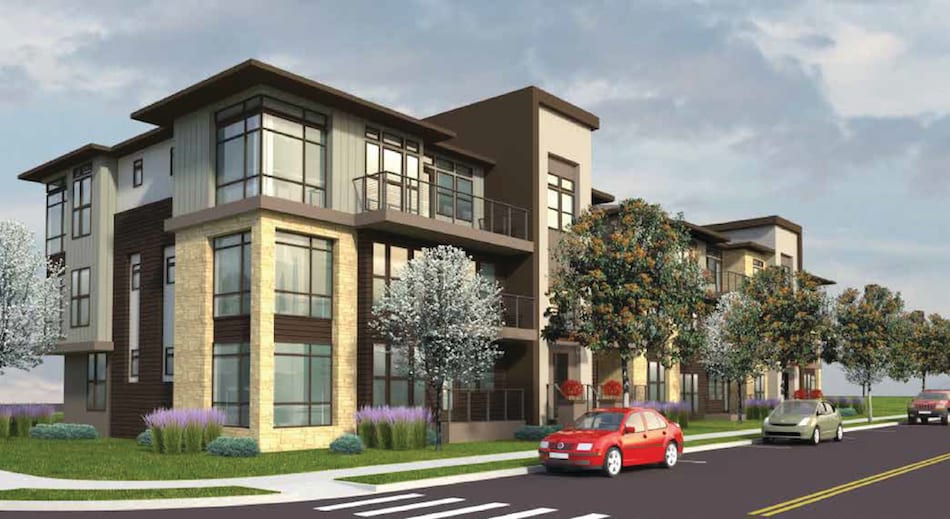 A rendering of the Solana Lucent Station in Highlands Ranch

Its other local communities are:

While not visible to residents, what sets Solana Lucent Station apart from every apartment community in the metro area and possibly almost every rental community in the U.S. is its ownership structure.

Instead of buying the land, ReyLenn controls it through a 75-year land lease.

“It’s an interesting project in that it is on a 75-year ground lease,” Jason L. Smith, the vice president of development who heads ReyLenn’s Denver office, told me last week.

“I don’t know this has ever been done before in an institutional apartment project before. I know I couldn’t find one,” Smith said.

ReyLenn would have liked to have bought the land, but the land is still technically owned by Englewood/Mclellan Reservoir Foundation.

Englewood created the foundation in 1999 to protect the watershed of a reservoir built in the 1950s. Englewood isn’t allowed to sell the property without a vote, he said.

“Everyone said, ‘Don’t do a land lease because you won’t be able to get financing,’” Smith said.

However, it did receive financing from the Bank of the Ozarks and didn’t have any problems raising private equity for it.

Another thing that sets the apartments apart is the units feature gas ranges.

“Electric ranges are less expensive, so everyone has them,” he said. “People say stay away from gas because it’s too expensive, but they’re really popular with residents.” 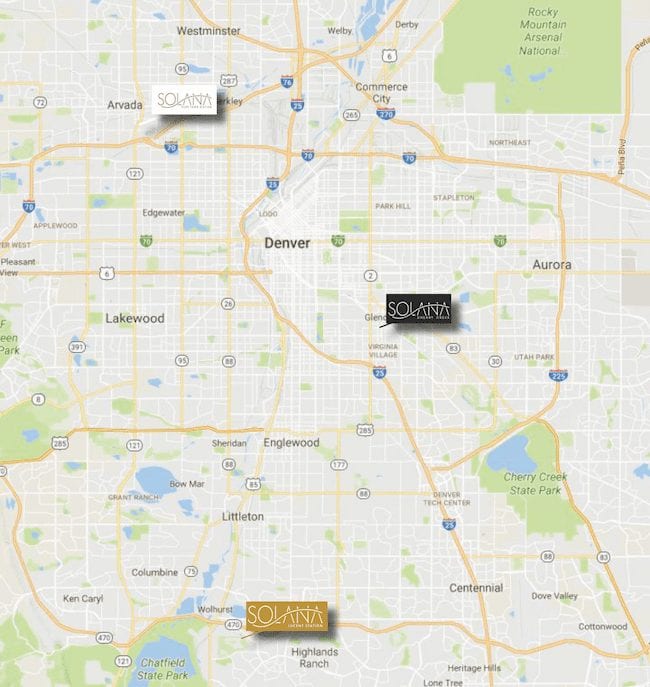 A map of the Solana communities in the Denver area

Solana Lucent Station also is LEED Silver certified. One of its sustainability features is electric vehicle chargers in the garages.

The community is being managed by Denver-based Mission Rock Residential. Five years ago, Mission Rock didn’t manage any units, and now it is responsible for almost 30,000 units across the Western United States. Solana Lucent Station is 100 percent nonsmoking. An 8,500-square-foot clubhouse and amenity center includes a state-of-the-art fitness center with in-person and on-demand classes; a Zen yoga studio and spin studio; a golf simulator; a pet grooming room, a bike repair facility and ski maintenance room; an indoor/outdoor kitchen with pizza oven; office; and lounge amenities.

Smith has been putting the deal together for Solana Lucent Station since 2012, when he first submitted a letter of intent to take control of the property.

“If you look at the 32 submarkets that Cary Bruteig (of Apartment Insights) tracks, the two strongest suburban submarkets are Golden and Highlands Ranch,” he said.

Golden has limits on growth that keeps the supply in check and Highlands Ranch is primarily controlled by Shea Properties, he noted.

Despite the land lease complication, the site had something going for it that can’t be denied.

“It’s just a great piece of dirt,” Smith said. “If you think of Highlands Ranch as a giant rectangle, this really is the northern entrance to that rectangle.”

The first buildings opened a few weeks ago and the community should be completely open by the first quarter of 2018, he said. 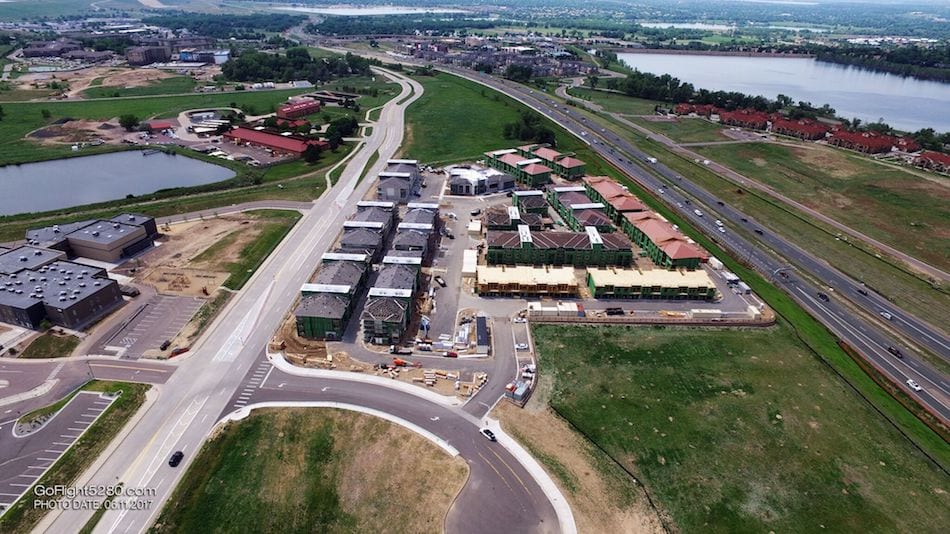 He expected it to draw a wide variety of residents, but some of the early people have been a bit startling in their demographic diversity.

“Yesterday and today, we signed one lease with a young, professional couple in their late 20s or early 30s who don’t have any children and a couple in their 80s who had sold a condo near Greenwood Village,” Smith said.

He thinks the older couple has grandchildren who live in Highlands Ranch.

The next development by ReyLenn will be about 280 units in Stapleton.

“We really wanted to serve that Fitzsimons area, and how great to be able to do that from a Stapleton address,” Smith said.

The community will be in both Denver and Aurora, with most of it in Aurora.

You can be sure Smith will be able to check off a lot of boxes for that community, too.