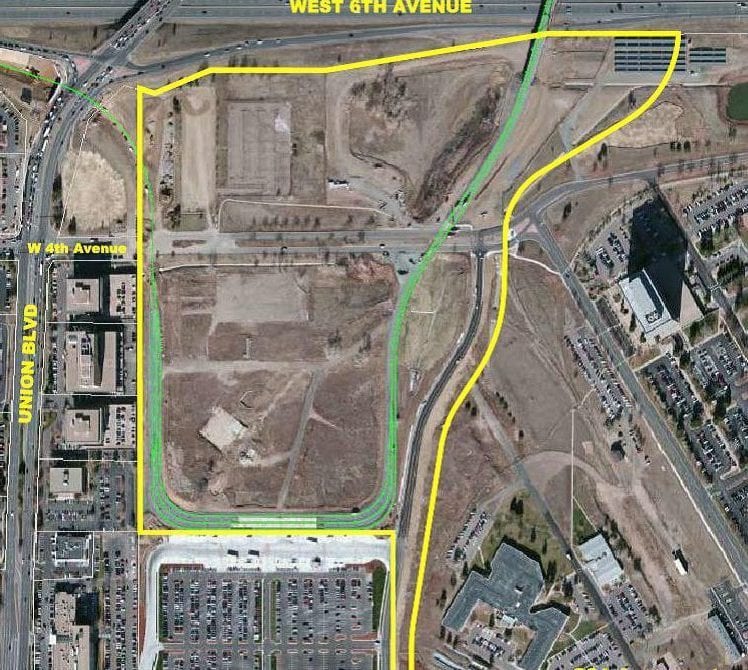 An aerial view of the Lakewood property that the GSA is auctioning in the Denver Federal Center.

The clock is ticking on an online auction to buy 59 acres of high-profile, transit-oriented development land being sold by Uncle Sam. 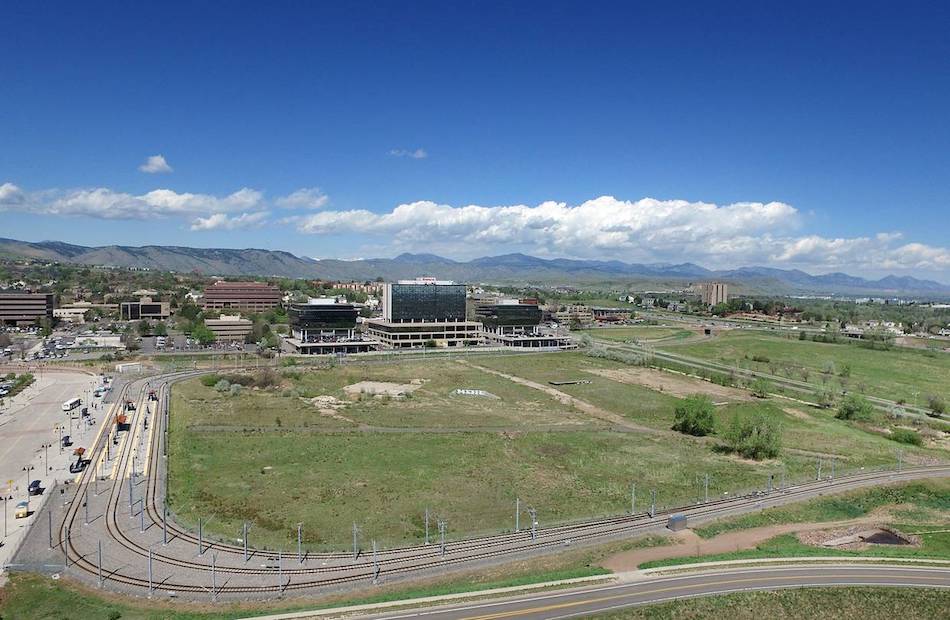 The GSA is auctioning this prime site in Lakewood online, but the auction faces some headwinds.

The current deadline for the auction for the land in the Denver Federal Center is Aug. 30.

As I am writing this, the ad by the General Service Administration on my Rebchook Real Estate Corner page in the Colorado Real Estate Journal announces there is seven days, 22 hours and 47 minutes until the auction comes to a close. The GSA is selling the land.

As of Tuesday afternoon, there have been seven offers for this land, which sits on a light-rail line.

The top bid for the property, which is truly at Main and Main, given that it fronts the south side of West Sixth Avenue and is east of Union Boulevard, is $6 million.

That is a mere $2.32 per square foot and a far cry from the estimated $30 million market value of the property. To put the size of the vacant and unused land in perspective, it is 56.7 percent as large as Belmar, the mixed-use and de facto downtown for Lakewood.

And unlike Belmar, this land is a TOD site, the most prized suburban property. 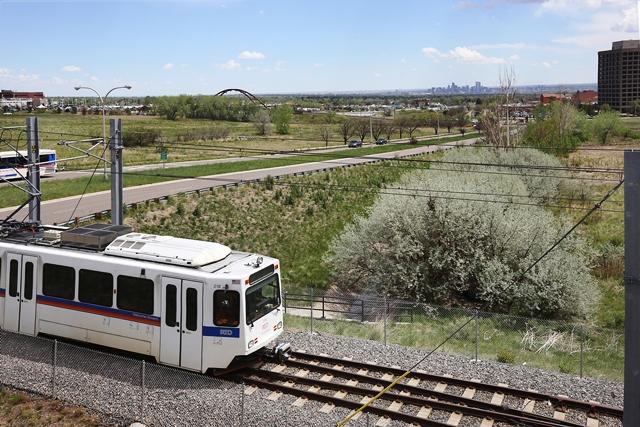 Light rail serves this TOD site in Lakewood that the GSA is auctioning.

“There might still be a few sites in the Rooney Valley that are bigger, and maybe there are one or two other sites that I can’t think of off the top of my head, but it certainly is one of the largest remaining undeveloped sites in Lakewood,” Jay Hutchison, public works director for Lakewood, told me.

However, just like if you were selling your GoPro camera on eBay, most of the serious bidding action is likely to occur as the deadline approaches.

But unlike eBay, the top bid doesn’t necessarily take it.

If a high bid arrives at 4:58 p.m. Aug. 30, two minutes before the deadline, the deadline automatically resets for 24 hours. That way, runners-up can talk to their partners, bankers and equity partners and decide if they want to make another run for the land. In some cities, the deadline has been reset 14 times before a winner emerged.

However, despite the obvious selling points of this property, it faces two market-rate headwinds. 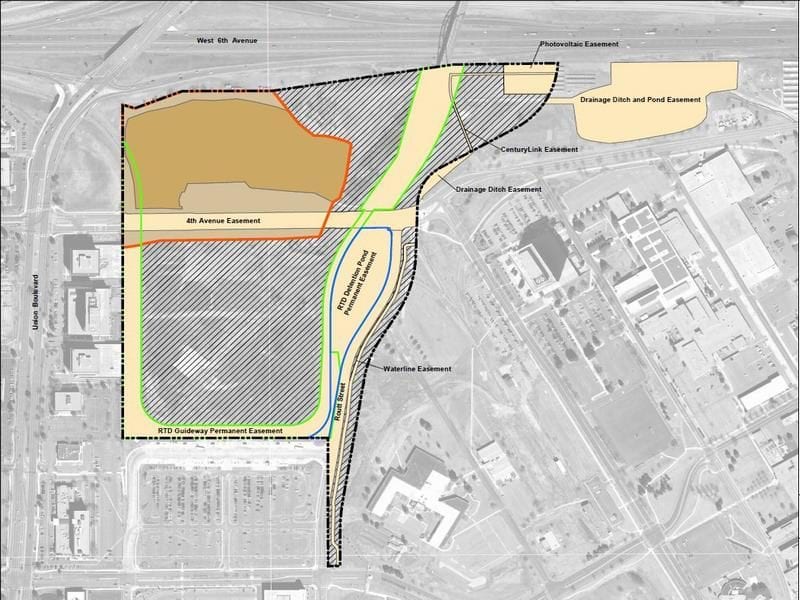 First is a lawsuit against the U.S. Department of Housing and Urban Development by the Colorado Coalition for the Homeless.

CCH won a victory in late July when U.S. District Court Judge William J. Martinez issued a ruling and order preventing GSA from closing on the land until Oct. 16.

However, the auction can still go on, although some media reports have indicated that the auction itself has been stopped in its tracks. It has not.

CCH wants HUD to determine that the land is suitable to assist the homeless. CCH would like the land transferred to it and is working with partners to come up with a development plan to provide a wide range of supportive housing, health, employment and supportive services.

“With housing costs rapidly rising throughout the metro area and land costs going sky high, this land provides a once-in-a-lifetime opportunity to develop needed affordable housing and services to meet the needs of homeless families and individuals,” John Parvensky, CEO and president of CCH, said earlier this month.

“Located adjacent to the RTD Federal Station light-rail station, we believe that a transit-oriented development that provides affordable housing and supportive services to these families and individuals will go far in meeting our goal of creating lasting solutions to homelessness in the area,” Parvensky added.

The city of Lakewood has no opinion on the CCH lawsuit, Hutchison told me. The land is zoned for residential, retail, office and hospitality. It can include buildings from 45 feet to a maximum height of 180 feet tall, or about three to 15 stories.

As far as Lakewood is concerned, “The intent is to see some kind of mixed-use, transit-oriented development that would take advantage of the light rail and bus services that are adjacent to the site,” Hutchison said.

“One concept that has been kicked around is to have a large employment center there and some housing that is supported by some retail, but not a big destination retail center,” he added.

A development might also include a hotel or two, he said. 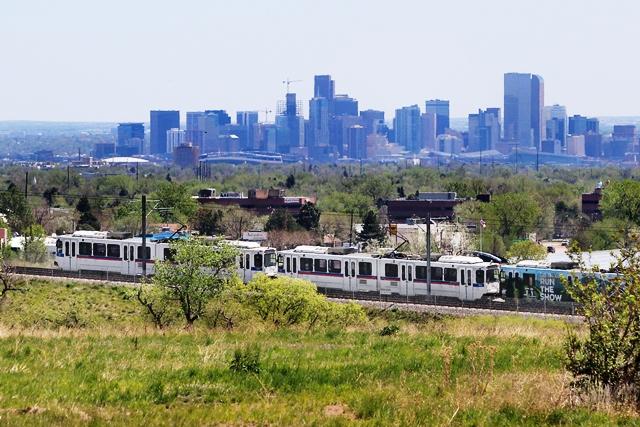 The 59 acres in Lakewood that GSA is auctioning is close to Denver.

In any case, the lawsuit may play out as early as mid-September, when HUD will reconsider its initial determination that the land was unsuitable for homeless assistance because of environmental conditions on a portion of the site.

The other potential roadblock that could give investors a second thought is a grassroots citizens’ proposal, Lakewood Strategic Growth Initiative, to limit housing growth by 1 percent in Lakewood.

But rather than approve the measure, the council is more likely going to place it on the ballot for a referendum in November.

The proposal is being opposed by people as diverse as Lakewood Mayor Adam Paul and Brad Evans, who publishes Denver Fugly, which some people have viewed as being anti-growth. Evans, however, isn’t against growth, but thinks too many ugly buildings are being constructed in Denver and nearby suburbs.

“If passed, it will make life more expensive for people already living in Lakewood,” Paul wrote.

I asked Hutchison if he thought developers might be giving second thoughts to buying this TOD gem, given the chance of Lakewood voters approving the housing development cap.

Tim Walsh, CEO and president of Golden-based Confluence Cos., thinks the site’s appeal could be dimmed by the anti-growth initiative.

“I know there is a fair amount of opposition to growth in Denver right now,” Walsh told me late Tuesday afternoon. “If that growth initiative does pass, I think it is going to be very challenging to develop that site into a vibrant, mixed-use site that would be similar to Belmar. And that is what it ought to be. It truly is a great TOD site, with a lot of good, long-term employees with all of the nearby federal and private-sector jobs. I think it would be a good location for a corporate campus. It also is a great site for entry-level condos, which is something Lakewood and the metro area needs. But I think the big challenge will be this anti-growth movement, which seems to be growing and gaining traction in Lakewood.”

As they say, timing is everything in real estate. And the clock is ticking.