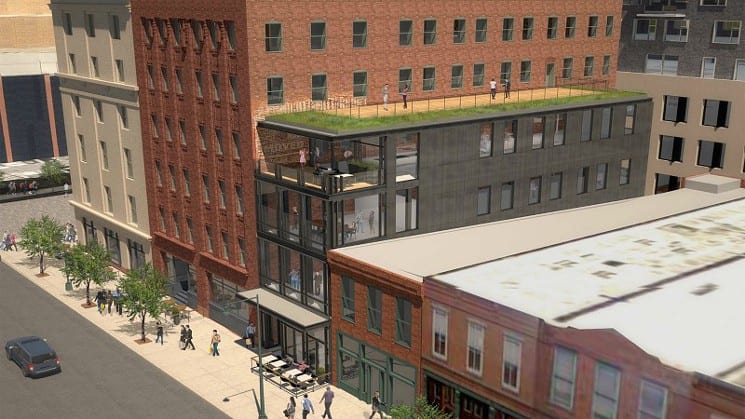 The 4-story, 10,800-square-foot office building is the latest project planned by Urban Villages. Semple Brown Design is the architect. A top official at Urban Villages will speak at an upcoming CREW Denver event.

“Underneath the title, the role, or the business jacket of a leader, is a human being struggling to figure it out – a leader with secrets.”

Hutchens will be the keynote speaker at a CREW Denver event from 8 a.m. to 1 p.m. March 14 at the Ritz-Carlton hotel at 1881 Curtis St.

“She spoke at one of CREW Network’s Leadership Summits and several of us heard her there and thought she was really valuable,” Duty continued.

In fact, Duty “came home with pages and pages of notes and ideas.”

Duty wanted to bring a national speaker to Denver.

That way, local CREW professionals “could benefit from that caliber of speaker without having to get on a plane and fly to a conference.”

Not only does Hutchens give great advice on being a leader, but also, “She’s pretty funny, so it’s fun learning” from her, Duty noted.

Indeed, Hutchens’ bio includes these “completely unnecessary” tidbits about what makes her tick.

There also will be a number of top local leaders speaking at the half-day CREW event.

Those attending can choose between two concurrent sessions that will provide CLE/CE credits.

One is titled: “Advanced 1031 Exchanges and Trump’s Impact on Economy, Taxes and Real Estate,” led by Tracey Wilson of IPX 1031 Exchange.

The other is “The New Age of Foreclosure.”

That session will be led by Deanne Stodden of Coan, Payton & Payne LLC.

The event also will feature a Powerhouse Leadership panel.

Successful women in Denver commercial real estate will discuss their journeys to success.

The panel will be moderated by Sara Croot of JPMorgan Chase.

The cost is $125 for CREW Denver members and $185 for non-members. To register for the leadership event, go to CREW Denver.