A Miami developer has unveiled plans for a $500 million condominium development that would bring 800 condominium units to downtown Denver in two, 40-story towers.

The towers, on a 55,000-square-foot property at 1901 Arapahoe St., would represent the single largest condo project ever built in Denver. Units are anticipated to be priced from the mid-$200,00 to more than $1 million. 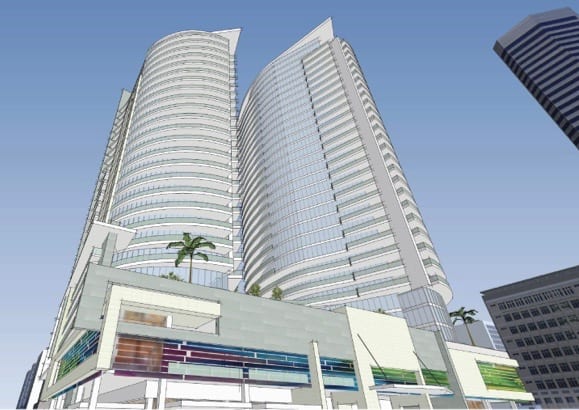 A look at the 2 proposed, 40-story condo towers planned for downtown. MOA Architecture is designing them.

The towers will have a total of about 1.1 million sf of space. For comparison, that is about the same square footage of the 56-story Republic Plaza, the tallest building in Colorado.

In Denver, they are promoting the development under the name Paradise Living, with a web page devoted to the condo towers.

“Denver is a very exciting city,” Renzi, 53, told me last Friday afternoon, moments after putting the site under contract for $22 million.

Buzz Geller, the owner of the land said Renzi “doesn’t need to close on the property for some time,” which he said is typical.

“No one closes on property until they get all the permits needed from the city,” said Geller, who paid just under  $3.2 million, or $57 per sf, when he bought the land in 1998.

The current sales price equates to $400 per sf.

Zoning allows up to 400-foot tall buildings on the site. The site is zoned D-C, which stands for Downtown Core. D-C zoned land often has no limits on height. However, this property is in what is known as Zone 2, which allows up a maximum height of 400 feet. The new towers would be among the 20 tallest in downtown.

Another view of the two 40-story towers, which would have a total of 800 units. Renzo Renzi is the developer.

The Spire, for example, the condo tower developed by Randy Nichols, of Nichols Partnership, has 41 stories and 496 condo units.

Renzi has been searching for land for a condominium development in Denver for about a year.

“Denver is one of the top cities in the U.S. for its economy and quality of life,” Renzi said.

Construction will begin as soon as they pre-sell 200 units.

“We expect that to be able to sell those in six months,” given the pent-up demand and shortage of condos in downtown, Geraghty said.

Renzi said the private equity for the development, yet unnamed, is in place. He said there will no problem in getting bank financing, once they sell 200 units. It will take 30 months to complete the two towers. The construction of the towers will create “thousands” of jobs, he said. 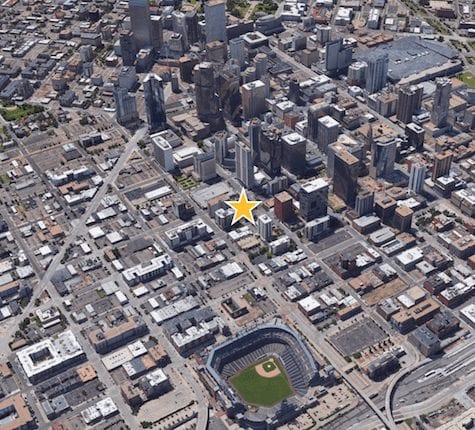 The two, 40-story towers planned for downtown would be walking distances to Coors Field.

Geller said he has an option to buy a “significant number of the condos,” as well as the retail portion.

“But I have an option and that is all it is ⎯  an option ⎯ to buy a significant number of condos, which I could then sell or hold them and rent them out,” Geller said.

The construction cost of the towers will be about $350 million, while the sold-out value of the condos, along with 30,000 square feet of ground-floor retail, will be $500 million or more, Renzi said.

Renzi loves the site for many of the reasons that led Geller to initially buy it.

“What I like about it is that it is a block and a half from LoDo,” Geller told me in 1998, when I was a reporter for the Rocky Mountain News. 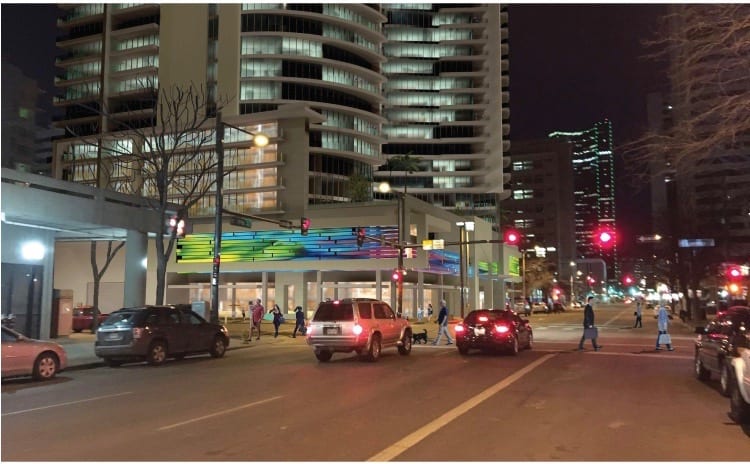 A rendering of what it could be like to drive past the new twin towers in downtown Denver at night.

“We see it as an alternative to LoDo. It’s not LoDo, but it’s not Uptown, either,” he added.

Today, it is considered between RiNo and LoDo.

When he initially bought the land, Geller’s plan was to develop condos on the site and sell them for about $150 per sf, or about $224 per sf in today’s dollars.

“Isn’t that amazing?” Geller said, when I reminded him of that.

“I think what Renzo is proposing is pretty exciting and a good option for that land,” he noted.

Renzi pointed out that it represents one of the largest undeveloped parcels remaining downtown. It is across the street from Sakura Square and the Ritz Carlton Denver,

“It is the missing link,” Renzi said. “It is a connection to the Ballpark area with downtown. It is very key. And it is pretty large. It is hard to find such a big, empty piece of land in downtown. When you walk past it, it just seems empty.” 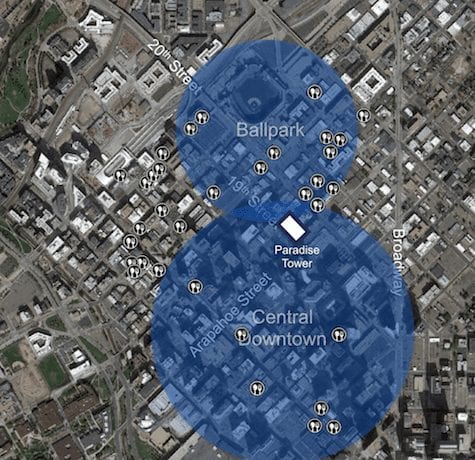 This map puts into perspective the location of the planned $500 million condo development.

When the towers are completed, the area will be “very pedestrian friendly. It will feel kind of like Larimer Square,” with new lights and landscaping, he said.

The towers are being designed by MOA Architecture, the same firm that is designing the new office building for DaVita in downtown Denver.

“Choosing an architect was a very tough decision,” Renzi said. “Denver has a lot of great architects. We talked to a lot of them and were very, very impressed. MOA was one of the first we spoke to and the timing worked out very well.”

He also is interviewing residential brokers to list the units.

“That’s also going to be a very tough choice,” he said. “The brokers in Denver are very, very good.”

Greeley-based Hensel Phelps will be the general contractor, with Clark Construction Group, which is building the 34-story Confluence apartment building off of 15th Street, near the confluence of Cherry Creek and the Platte River.

Most housing developments in Denver in recent years have been for rental apartments, rather than for condominiums, in a large part because of Colorado’s onerous construction defect rules. The rules make it easy for a home owner association’s board to sue a developer, even for frivolous reasons.

Renzi said he is concerned about the construction defect laws, but is convinced that the towers will be so well built that won’t be an issue.

“I am a developer who builds and sells, while other developers just do rentals,” Renzi said.

“I think there is definitely a market in downtown for owning, rather than just renting,” he added.

The tower will include three swimming pools. One would be above a parking garage on the sixth floor of a building and the other two would be on the rooftops. There will be a restaurant open to the public adjacent to one of the rooftop pools, he said.

“It’s going to have a very resort-feel,” Renzi said.

The restaurants would be of the type of caliber of new restaurants in Cherry Creek North, said Geraghty, 61, who has owned nightclubs in Denver and has a long history in hotels, restaurants and ski resorts.

For Renzi, 53, these towers would be a comeback story.

He amassed a vast real estate portfolio in Miami, but lost it in foreclosures and had to file for Chapter 7 bankruptcy.

Because of the experience, he said he has come out stronger and smarter.

“We all now the most important thing is knowledge,” Renzi said.

Things were so bad during the recession that his buildings could have been built out of gold and they still would have lost them, he said.

“In my case, I hadn’t done anything bad or dishonest, it was just the timing was bad and banks were going out of business,” Renzi said.

“If I could have held on for one more year, I would have recovered everything,” he said.

While it wasn’t any fun going through the foreclosures and bankruptcy, “in a funny way, it was all for the best. I believe everything happens for a reason.”

“To tell you the truth, if I hadn’t lost everything in Miami, I never would have come to Denver and have this opportunity.”