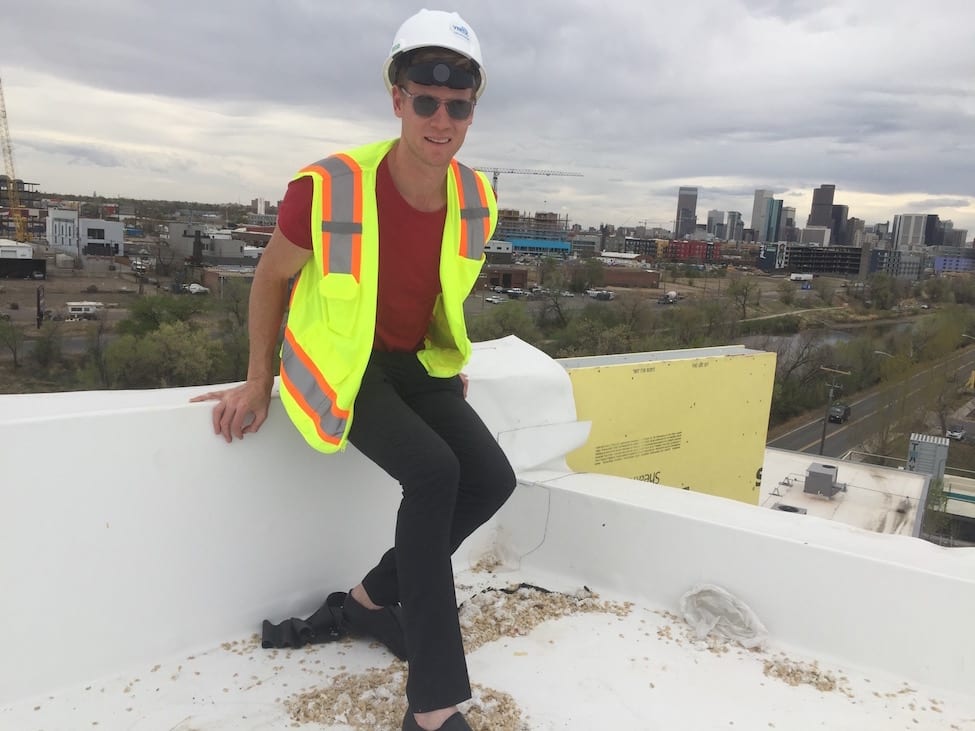 Kyle Zeppelin shown on the rooftop of Flight.

Freight was the only multitenant, speculative office building under construction in Denver during the Great Recession, recalled Kyle Zeppelin, on a recent pleasant spring afternoon, as he sipped an espresso in the Black Black Coffee shop in the mixed-use Taxi development.

Freight was 100 percent leased even before it opened in Taxi.

Now, Zeppelin, the son of Mickey Zeppelin, the pioneering developer who took a gritty, Yellow Cab terminal on the banks of the Platte River and turned it into the commercial anchor of RiNo before RiNo was on the map of millennials, is focusing his attentions on another office project. 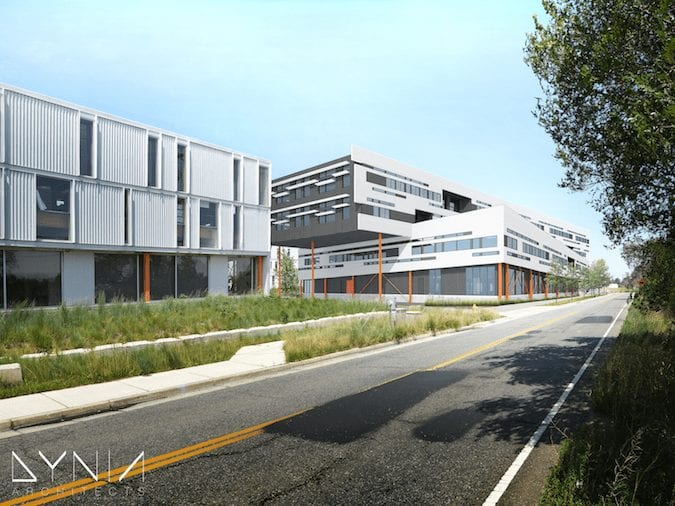 A rendering of Flight in Taxi, which was designed by Dynia Architects.

Zeppelin is in the early stages of introducing the two top floors in the Flight building to the market. The 140,000-square-foot building, adjacent to Freight and Freight Residences, is under construction.

Because Boa Technology is taking the bottom two floors in Flight at 3575 Ringsby Court, that leaves 40,000 sf on the top two floors.

“This is the type of space that normally you would lease to a prestigious user like a law firm,” which could crow about the cachet of the location and the views, which, by the way, include two other Zeppelin projects under construction: the Source hotel and Zeppelin Station. 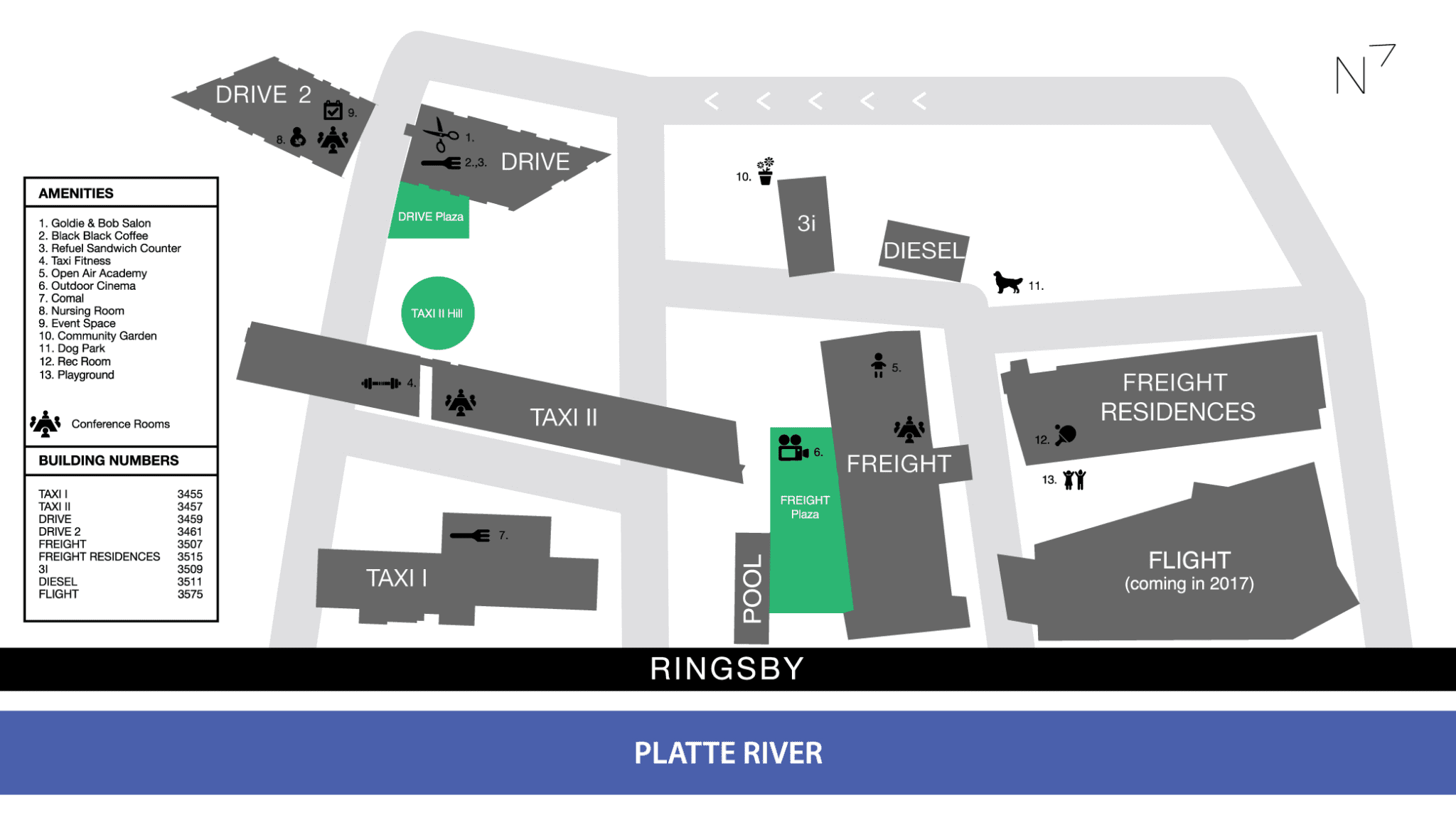 This map of Taxi shows where Flight and other buildings are located.

Zeppelin likes having a mix of boutique tenants with big players, which furthers the corporate culture and collaboration tenants share at Taxi.

“Taxi has never been an incubator space where people are moving out of their home into their first office,” he said.

Rather, they might be on their second or third level of financing and can grow at Taxi.

With the top two floors of Flight, Zeppelin decided to break with the growing movement to provide shared, or co-working, space.

“Co-working sounds great, but there are times you need just to shut your door in your office and get work done,” Zeppelin said.

“And people really get tired of sitting at a “hot” desk” that they share with other employees, he said.

Another view of Flight, showing its rooftop. Rendering courtesy of Dynia Architects.

He also eschewed the traditional office space where prospective tenants would walk the raw space and negotiate things such as tenant finish allowances.

“Honestly, it is hard for people to envision what the space will look like and figure out how much space they really need,” Zeppelin said.

Also, with traditional office space leases, the commercial contracts tend to be long and detailed.

“Tenants really feel like landlords nickel and dime them with these long, complicated lease agreements, with things like escalating CAM charges,” Zeppelin said.

He expects the leasing contracts for the 80 office spaces will probably run only four or five pages.

The monthly rent of $2,000 to $2,500 is more relevant than the rent per sf, he added. He expects most tenants will sign three- to five-year leases.

Zeppelin said he will be able to use Zeppelin Development’s knowledge and buying power to outfit the offices with efficient furniture and design.

He doesn’t think tenants will feel as if they are losing the ability to customize their own space with the turnkey space.

“Because we have been doing this for so long and are so experienced, we honestly know what they need more than a lot of companies do,” he said.

“And we can deliver it at a lower cost and more efficiently.”

Zeppelin, 44, came up with the idea organically.

“I live in Taxi and office at Freight, so I am on the ground talking to our tenants every day,” he said.

“We’re not some corporate entity based in Kansas City that just collects monthly rent checks and is out of touch with their tenants,” Zeppelin said.

Flight is the 10th building in the Taxi development on 25 acres along Ringsby Court.

“Back in 2000, Mickey realized that creative class wanted office space that provided natural light, fresh air, the latest in technology, cool architecture, common areas and a place where you could bring your dog to work,” said Kyle, a lawyer by training who joined his father soon after Taxi got off the ground.

Flight will take the Taxi office to a new level, incorporating what they have learned over the years, he said. 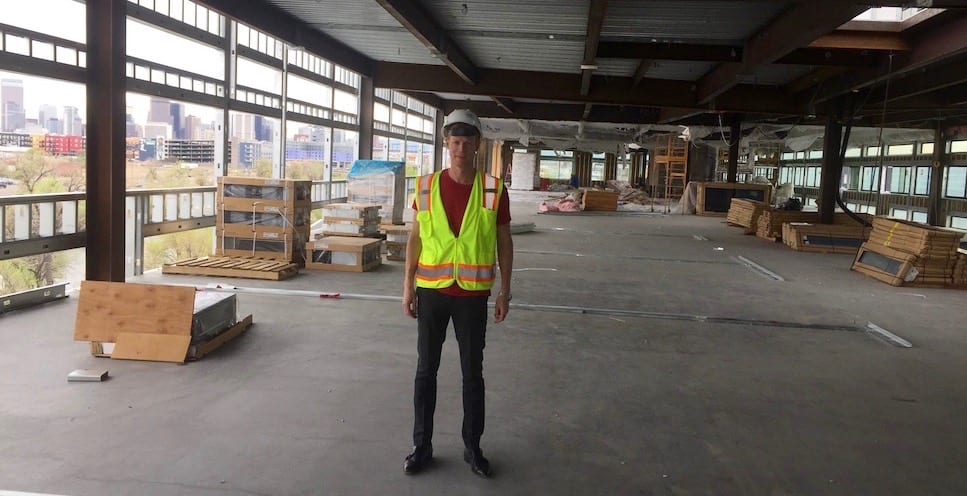 Kyle Zeppelin stands in what will be one of Boa Technology’s floors at Flight.

“Boa currently has about 35,000 sf in Taxi, so they will almost triple in size,” Zeppelin said.

He doesn’t expect to have any problems backfilling the space it will be vacating.

Flight, like many of the buildings in Taxi, will be designed by the award-winning Dynia Architects, headed by Stephen Dynia.

It will be a LEED Platinum building.

“We will have the second-largest “green” roof in Denver,” Zeppelin said. The building also will sport one of the largest solar arrays, he said.

It is being constructed by Vertix Builders. 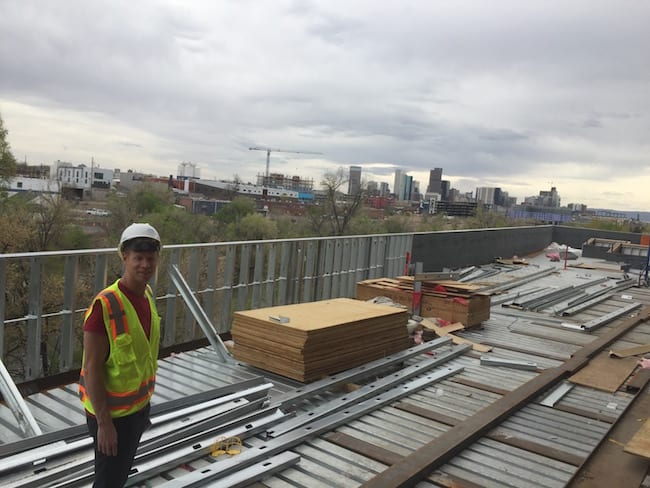 Kyle Zeppelin is shown on what will be the second-larget “green” roof in Denver.

Tenants, of course, can find boutique office space in other buildings.

But one thing they can’t duplicate is the amenity of Taxi itself.

“At Flight, you will access to the 600,000 sf of Taxi,” which includes the Comal restaurant, Open Air Academy, and a wide variety of housing, including 300 affordable housing units on the drawing board.