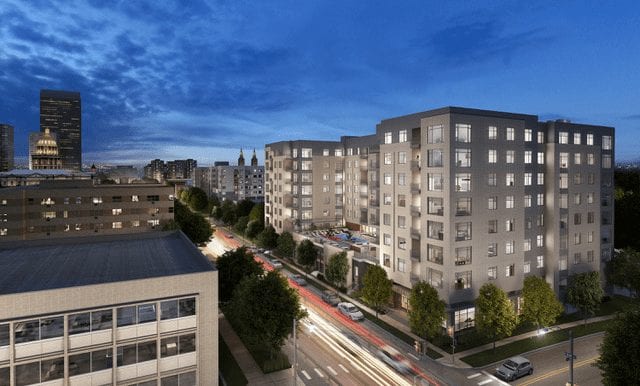 Mill Creek Residential, a privately held apartment developer, has been planting its flag in some of Denver’s trendiest neighborhoods.

Together, the privately held, Dallas-based company has more than 1,300 units owned, under construction or on the drawing board in Denver neighborhoods

My back-of-the-envelope estimate is that the total sales value of the communities would top $460 million in today’s market; the communities have a construction value of more than $370 million.

Mill Creek, with luxury, rental communities planned or underway in RiNo, LoHi, Capitol Hill and Observatory Park near the University of Denver, may continue to grow, according to Senior Managing Director Brian Wynne, who heads the Denver operation.

“We are active, but at the moment we are very selective,” Wynne said. “We will consider new opportunities, but on a very selected basis.
It is not, however, interested developing rental communities in the heart of the central business district or near Denver Union Station.

Shown is the129-unit Modera LoHi Mill Creek Residential plans to start contruction on later this year. It is being designed by Shears Adkins + Rockmore.

“With all of the activity going on in the downtown core of the CBD and Union Station, there is a real fear of overbuilding and too much competition,” Wynne explained. “We focus all of our activity in areas slightly on the periphery of downtown, like LoHi, Washington Park, Capitol Hill and RiNo.

“We like areas that have a residential feel and are walkable,” he said.

“And in these neighborhoods, there tends to be a lot of small, private owners, which makes it difficult to assemble large parcels, which provides another barrier to entry,” he said.

Across the portfolio, he expects average rental rates to be north of $2.50 per square foot.

“We do include some large, two-bedroom units to attract empty nesters, but they are not our target market,” Wynne said.

In its most recent deal, Mill Creek Residential paid $6.02 million to the Colorado Association of School Boards for a 0.75-acre site at 12th Avenue and Grant Street in Capitol Hill.

Mill Creek beat out four other out-of-state apartment developers for the site, according to David Morrison, who listed the land with fellow Colliers International broker Phil Sweeney.

Mill Creek will develop an eight-story building on the site that will be designed by Davis Partnership Architects and built by Shaw Construction.

“Amenities will include a resort-style pool and spa on the second level, a really nice fitness and clubhouse and a sky deck on the northwest corner of the eighth floor that will provide incredible views of the city and the mountains.”

Winsted, who has represented Mill Creek on some of its other land purchases, echoed Wynne for the reasons why it liked the Capitol Hill.

“It’s close to everything in a very walkable neighborhood,” Winsted said.

Also, it doesn’t compete with its other communities.

“It provides really good spacing with its other downtown projects,” Winsted said. “It fills a geographic hole for them.”

Morrison said the parcel was a good choice for Mill Creek.

“My understanding is that they really focus on the very best locations,” Morrison said.

Mill Creek’s purchase of the site also shows there is appetite for apartment developments, despite a tougher lending environment because of overbuilding fears, Winsted said.

“There is still demand for sites near TODs (transit oriented developments), downtown and other employment centers,” Winsted said.

“Some equity lenders are getting a little nervous about Denver, but from what I am seeing, really good sites still have strong demand, while there is less desire to buy secondary sites,” Winsted said.