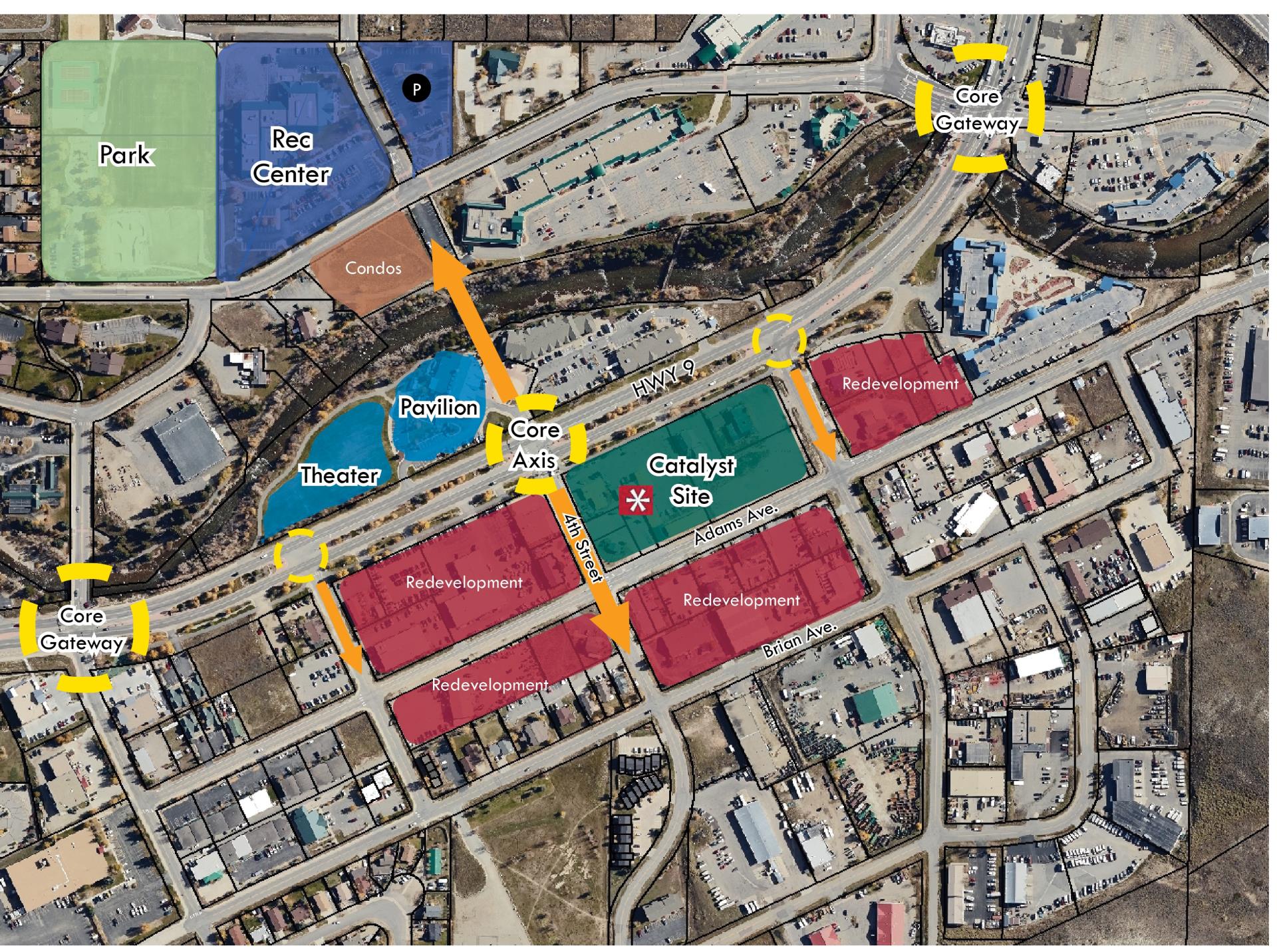 This map shows the redevelopment opportunity to create a pedestrian friendly, mixed-use development in downtown Silverthorne.

Teams from Milender White and the St. Charles Town Co. recently made the 67-mile trip to Silverthorne to make pitches on redeveloping the heart of the downtown of the Summit County community.

Milender White and the St. Charles Town Co. were the two group that responded to a request for proposals to redevelop about 3.25 acres in Silverthorne, which was incorporated as a town 50 years ago on April 5.

The selected team has the opportunity to make history.

“The opportunity to develop property that will define the identity and character of an entire mountain town for decades to come is rare, and that’s just the opportunity we have in Silverthorne today,” according to Silverthorne Mayor Bruce Butler.

Town officials are pleased that Arvada-based Milender White and Denver-based St. Charles Town Co. responded to the RFP and are interested in shaping the future of the town, said Mark Leidal, assistant town manager for Silverthorne.

While neither group is particularly associated with mountain developments, they both have impressive accomplishments in the Denver area.

Milender White has served as the general contractor on high-profile developments that include:

Milender White was the general contactor on the Denver Union Station redevelopment. Now, it is looking at redeveloping 3.25 acres in downtown Silverthorne.

St. Charles Town Co. is headed by Charles Woolley, who as a broker in 1987 negotiated the lease with John Hickenlooper for $1 per square foot per year for the Wynkoop Brewing Co.

Hickenlooper has done OK for himself since his craft brewing days, having served as Denver’s mayor and now governor of Colorado … but, of course, you know that.

Since then, the St. Charles Town Co. has developed more than 20 projects at a cost topping $200 million.

They include an eclectic mix and high-profile infill sites such as the Lowenstein Theater renovation, which is anchored by the Tattered Cover bookstore, and the redevelopment of the historic Equitable building.

St. Charles Town Co. has developed everything from affordable rental housing to the Sloan’s Lakefront retail strip center in Edgewater.

Woolley recently sold a site for $10 million in LoHi, where he initially planned to develop a $65 million hotel.

Town officials and owners of the downtown Silverthorne land expect to spend 90 minutes to two hours today interviewing the teams from the St. Charles Town Co. and Milender White.

“The dollar volume of the redevelopment is pretty hard to say,” Leidal said.

“It will depends on the program and the concepts they put out there before we know the actual total dollar amounts,” he said.

“But with a 3.25-acre site in the heart of downtown, it will be pretty significant.”

The redevelopment, he said, should create a “pedestrian-friendly, walkable downtown. We’d like to see a true mixed-use development with offices, retail and residential,” he said.

The residential component would include both for-sale and rental units.

He expects that no buildings would be more than three or four stories tall.

Economically, Silverthorne has bounced back strongly from the Great Recession, he said.

“The economy has picked up and is doing quite well, and the building boom is back,” Leidal said.

The town itself is developing a $9 million performing arts center, a public-private partnership. Silverthorne also is benefitting from about $21 million in private residential developments and new breweries.

“The Sauce on the Blue restaurant opened about six months ago in downtown and is doing quite well,” Leidal noted.

The redevelopment site is owned by three individuals who are eager to see their property redeveloped.

Earlier this year, Ryan Hyland, the town manager of Silverthorne, summed up the redevelopment to me this way: “Many mountain towns have historic downtowns, but Silverthorne does not, so we have the opportunity to create that history.”