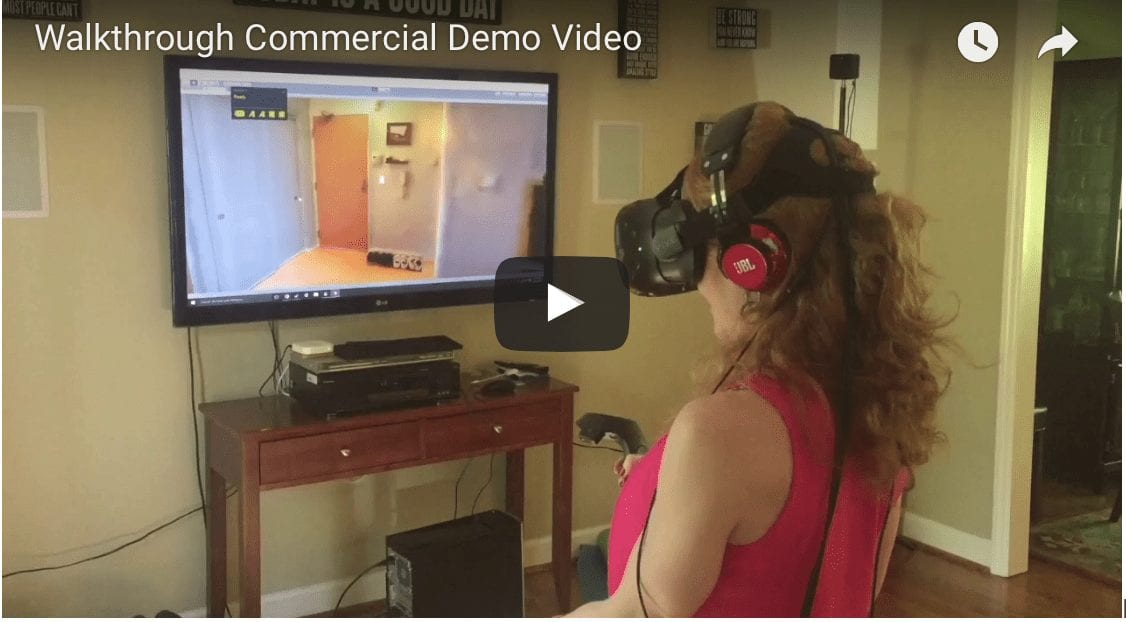 I donned the virtual reality goggles, and the 2,000-square-foot office that Walkthrough leases with another company in Lower Downtown was replaced by office furniture supplied by one of Walkthrough’s customers, Interior Environments.

A virtual, green-lined grid, which reminded me of the Matrix, kept me from walking into the walls of Walkthrough’s office on the second floor of 1624 Market St.

There also is a bit of Star Trek’s transporters in the experiencnce, as you can “teleport” and rearrange furniture in the virtual, 3-D world.

You can actually pick up a virtual chair, for example, and put it next to a virtual table, once Walkthrough has mapped out the environment.

Interior Environments is one of the first commercial real estate clients for Walkthrough, founded last June by entrepreneurs  Pascal Wagner and Jeremy Thiesen.

“Potentially, we’re working with another company that has 30,000 sf of vacant office space in downtown,” Wagner said.

Walkthrough also has helped a marijuana shop design its interior.

In less than a year, Walkthrough has grown to 10 employees and reach 40 by the end of the year, according to Wagner.

Wagner expects that commercial real will fuel a lot of Walkthrough’s growth.

“It’s really hard to imagine what a space will look like when it is furnished. And it can take two weeks to create a mock space and rearrange furniture in it,” he said.

“According to Interior Environments, there hasn’t been a commercial distributor that has been able to offer potential customers a way to experience/walk through their future office space with all their furniture in it without ordering it and seeing it in person,” Wagner said.

Although the vast majority of Walkthrough’s 180 customers are currently residential real estate brokers, Wagner expects that a third of its business could quickly be in commercial real estate.

“It’s really hard to tell, as we’re just now just getting into this space as to how much it will be of our business as a whole, but it’s our contracts in commercial that are really allowing us to put a lot of extra capital and engineers into developing virtual reality,” Wagner said.

Interior Environments used Walkthrough’s virtual reality technology in a bid to provide furniture for Toastmasters’ new world headquarters, according to Wagner. IE is now one of the finalists, he said.

While virtual reality is just starting to make inroads into Denver’s commercial real estate scene, it has been used in other parts of the country.

Virtual real estate tours were used by leasing agents to showcase a $60 million renovation of a 40-story office tower in Manhattan a year before the upgrades in the 850,000-sf building were completed, for example.

Goldman Sachs Group predicts there is at least $100 billion worth of opportunities for virtual and augmented reality uses by 2025.

Wagner, who grew up in Sarasota, Florida, but was born in Germany and became a U.S. citizen five years ago, initially was a consultant to e-commerce companies for Facebook advertising.

“After college, all my friends were going to grad school, but I wanted to start a business,” the 26-year-old Wagner said.

He spent nine months working from Bali, because some friends had shown him pictures and “it looked awesome.”

However, it was Boulder, not Bali, that fired up his entrepreneurial drive.

“I knew I wanted to start a tech company and the coolest and most innovative stuff was coming out of Boulder,” he said.

For example, there is a company in Boulder that will soon come to market with a software and hardware program that will turn your smart phone into a virtual reality program, he said.

A lightbulb for what became Walkthrough popped into Wagner’s head when he received a call from a Boulder Realtor who was driving 40 minutes to show a client a listing.

“I thought instead of wasting all of that time driving, you should be using virtual reality to tour your homes,” Wagner said.

In addition to mapping out the home or commercial space for virtual reality, Walkthrough provides traditional photography and video of homes.

“We incorporate the old school into the new school” of features, Wagner said.

Moving forward, the next evolution of Walkthrough could be providing a database for virtual reality homes and commercial spaces, similar to a Zillow or CoStar.

“That might be a year or two down the line,” Wagner said.

And it wouldn’t just be for space in existing buildings.

“This could really help a developer prelease space that hasn’t even broken ground yet and help him get financing,” Wagner said.